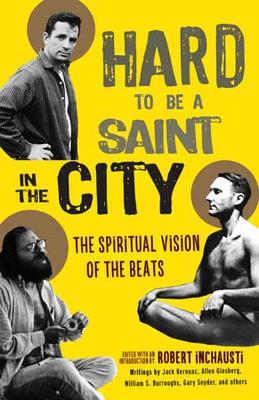 Hard To Be A Saint In The City

An exploration of Beat spirituality--seen through excerpts from the writings of the seminal writers of Beat Generation themselves.

The Beat writers stand out as prophets who made a valiant effort to speak the truth in the face of the establishment values of the American post-WWII period, and the fact that so much of their work has stood the test of time is testimony to their importance. The Beat movement was at heart, according to Robert Inchausti, a spiritual enterprise, and the writings compiled in this anthology provide convincing evidence for that claim. Using his broad knowledge of Beat literature, he has created this treasury excerpts from the writings of such figures as Jack Kerouac, Allen Ginsberg, and William S. Burroughs, but also of lesser-known Beatniks--arranged in a way that gives a shape and significance to their spiritual quest. Included are Kerouac's dialogues with Ginsberg and Burroughs on writing as a form of religious resistance and revelation, along with accounts of their experiments with psychedelics and visionary practices, which will then include their shared thoughts on meditation and psychedelic experimentation as visionary practices. This is considerably more than a collection of Beat spiritual writings. It's a kind of introduction to Beat spirituality, presented systematically in the Beats' own words.

Buy Hard To Be A Saint In The City by Robert Inchausti from Australia's Online Independent Bookstore, Boomerang Books.

» Have you read this book? We'd like to know what you think about it - write a review about Hard To Be A Saint In The City book by Robert Inchausti and you'll earn 50c in Boomerang Bucks loyalty dollars (you must be a Boomerang Books Account Holder - it's free to sign up and there are great benefits!)

ROBERT INCHAUSTI, PhD, is a professor of English at Cal Poly, San Luis Obispo, and is the author of numerous books, includingaSubversive Orthodoxy,aThomas Merton's American Prophecy,aThe Spitwad Sutras, andaBreaking the Cultural Trance. He is, among other things, a Thomas Merton authority, and editor of the Merton booksaEchoing Silence,aSeeds, andaThe Pocket Thomas Merton. He's a lover of the literature of those who challenge the status quo in various ways, thus, he has had a lifelong fascination with the Beats.

A Preview for this title is currently not available.
More Books By Robert Inchausti
View All