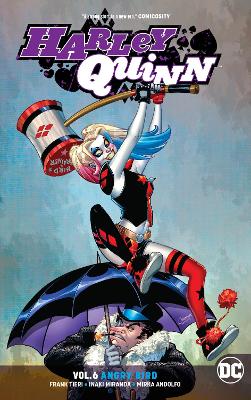 Look, we know Harley's crossed paths with some ridiculous guest stars...but we assure you, this is the looniest one yet! And in the "Secret Origins" backup, see where Harley's most steadfast companion and tenant, Big Tony, comes from--and why he sticks by the side of his insane (but very charming) landlord!

» Have you read this book? We'd like to know what you think about it - write a review about Harley Quinn Vol. 6 Angry Bird book by Frank Tieri and you'll earn 50c in Boomerang Bucks loyalty dollars (you must be a Boomerang Books Account Holder - it's free to sign up and there are great benefits!)

Frank Tieri is an American comic book writer. He began his career in 2000 working for Marvel Comics on the title IRON MAN and later he worked on titles like WOLVERINE, DEADPOOL and more. His first published work for DC Comics was in 2007 on the title JSA CLASSIFIED and afterwards he worked on titles like GOTHAM UNDERGROUND, BATMAN AND THE OUTSIDERS, COUNTDOWN PRESENTS- LORD HAVOK AND THE EXTREMISTS, ARKHAM MANOR, CONVERGENCE- JUSTICE LEAGUE and CONVERGENCE- SUICIDE SQUAD.

A Preview for this title is currently not available.
More Books By Frank Tieri
View All