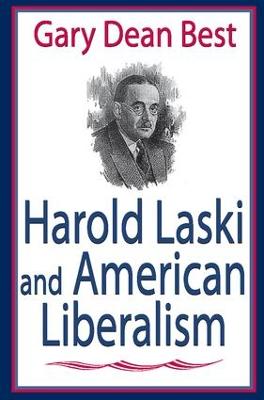 For nearly three decades, the English political scientist Harold Laski was the gray eminence of American liberalism and its most influential Marxist public intellectual. As a fervent proponent of the New Deal in the 1930s, much of Laski's success stemmed from the fact that he offered answers when so many Americans had only questions. By the postwar years, however, his reputation was in decline and his influence left the Democratic Party vulnerable in the 1948 elections. In Harold Laski and American Liberalism Gary Dean Best traces the trajectory of Laski's American career and accounts for its ultimate failure. American politics and society were central to Laski's intellectual enterprise. As Best shows, probably no one residing in America has published as many words critical of the United States as did this Englishman. Virtually no aspect of American life went unscathed, and yet at the root of every attack was American capitalism, the businessman, those with property, who, in Laski's view were the source of all the perversion of American life.
The 1930s was a period of ferment among America's intellectuals, and it may have been partly because of Laski's influence that so many abandoned their indifference to politics in the 1920s to become Marxist proponents for brief periods in the 1930s. By the 1940s it was only Laski who was bewildered - at the failure of his diagnoses and the rejection of his prescriptions even by those who had been captivated by him in the previous decade. By the time he died, in 1950, his earlier pronouncements seemed silly, and the increased stridency and shrillness produced by his disappointment had begun to bore even many who had been devoted to him in earlier years. As this volume shows, the real tragedy for Laski was that be allowed his intellect to be captured and held captive by the Marxian dialectic, denying himself the use of his own reason despite that dialectic's repeated failures. Harold Laski and American Liberalism will be of interest to intellectual historians, political scientists, and American studies specialists.

Other Editions - Harold Laski and American Liberalism by Gary Best » Have you read this book? We'd like to know what you think about it - write a review about Harold Laski and American Liberalism book by Gary Best and you'll earn 50c in Boomerang Bucks loyalty dollars (you must be a Boomerang Books Account Holder - it's free to sign up and there are great benefits!)

Gary Dean Best is professor emeritus of history at the University of Hawaii. Among his books are The Dollar Decade: Mammon and Machine in 1920s America, The Retreat from Liberalism: Collectivists versus Progressives in the New Deal Years, The Life of Herbert Hoover, and The Nickel and Dime Decade: American Popular Culture in the 1930s.

A Preview for this title is currently not available.
More Books By Gary Best
View All