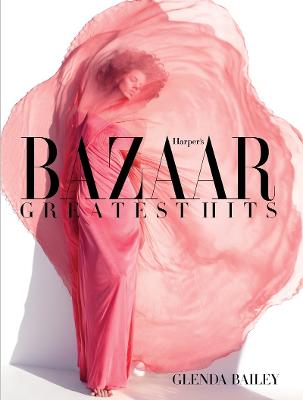 Harper's Bazaar is America's longest-running fashion magazine, revered for its style-setting contributions to fashion, photography, and graphic design. Under the direction of Glenda Bailey in this decade, the magazine has maintained its position as a prominent cultural icon. Bailey is known for commissioning dazzling visual features that frame fashion in the context of contemporary pop culture and aesthetics. Shot by well-known photographers and featuring supermodels and supercelebrities, Bazaar's fashion photography is always beautiful--and entertaining. Harper's Bazaar: Greatest Hits is a collection of more than 300 photographs that chronicle the best fashion of our time. A celebration of fashion, a romp through a riotous and eventful decade, and a banquet of contemporary imagery, Harper's Bazaar: Greatest Hits is also a glamorous object in itself.

"So if you love pop culture and you love fashion, you'll want to pick up a copy of Harper's Bazaar: Greatest Hits, a new book that's packed with both."
--Cosmopolitan.com

"The images, taken by some of the world's greatest photographers, are awe-inspiring."
--ARTINFO

"It's been 10 years since editor-in-chief Glenda Bailey took the reins at Harper's Bazaar, and the magazine is celebrating the milestone with a splashy coffee table book. Harper's Bazaar: Greatest Hits (Abrams) illustrates Bailey and creative director Stephen Gan's tenure through more than 300 colorful images, organized chronologically. The mag's memorable moments also include essays from luminaries like Patti Smith and our own Arianna Huffington, who wrote about the politics of fashion prior to the 2008 presidential election."
--Stylelist.com

"This book is a fashion lover's dream."
--WhoWhatWear.com

» Have you read this book? We'd like to know what you think about it - write a review about Harper's Bazaar: Greatest Hits 2001-2011 book by Glenda Bailey and you'll earn 50c in Boomerang Bucks loyalty dollars (you must be a Boomerang Books Account Holder - it's free to sign up and there are great benefits!)

Glenda Bailey has been the editor-in-chief of Harper's Bazaar since 2001. By infusing Bazaar's great tradition of high fashion and innovative art direction with her own irreverent contemporary sensibility, she became a leader in the worldwide fashion establishment. She has won numerous awards over a long career as a magazine editor. She was awarded an OBE in 2008. Stephen Gan is the creative director of Harper's Bazaar and a founder and creative director of the cutting-edge fashion magazine Visionaire. He has also been a fashion editor and photographer, and he has directed advertising campaigns for Calvin Klein and Dior Homme.

A Preview for this title is currently not available.
More Books By Glenda Bailey
View All