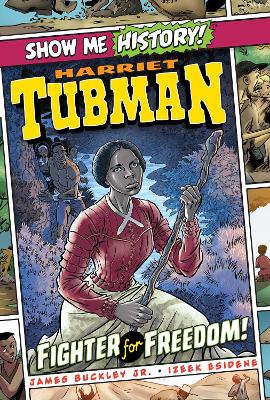 Harriet Tubman escaped slavery, helped dozens make it to freedom, and then became an abolitionist and women's rights advocate. Here's the remarkable life story of an American hero, told in an exciting graphic novel format.

Harriet Tubman lived an incredible life, one more heroic than any comic book superhero. In 1849 she escaped slavery for the first time. Then she headed back into the South, helping about 70 slaves find freedom on more than a dozen dangerous journeys along an elaborate abolitionist network called the Underground Railroad. Harriet Tubman: Fighter for Freedom! is the latest in the Show Me History! collection, previously featuring the stories of real-life American luminaries such as Abraham Lincoln, Alexander Hamilton, and Martin Luther King, Jr. Like the rest of Show Me History!, and befitting her almost unbelievable life, Fighter for Freedom! is presented in full-color, graphic novel format-a long-form comic book.

» Have you read this book? We'd like to know what you think about it - write a review about Harriet Tubman: Fighter for Freedom! book by James Buckley and you'll earn 50c in Boomerang Bucks loyalty dollars (you must be a Boomerang Books Account Holder - it's free to sign up and there are great benefits!)


A Preview for this title is currently not available.
More Books By James Buckley
View All