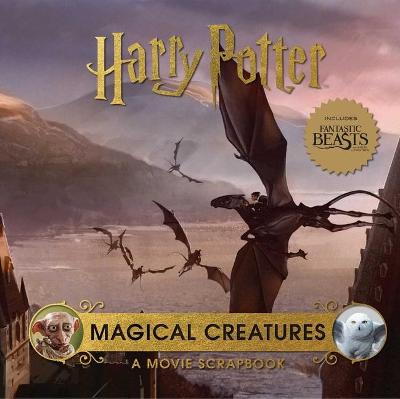 Packed with bonus collectible cards, art prints, stickers, posters, and more, Harry Potter: Magical Creatures: A Movie Scrapbook is a one-of-a-kind guide to the unique creatures of the Wizarding World.

From centaurs to merpeople and horn-tailed dragons, magical creatures and terrifying beasts are beloved and fascinating characters in the Harry Potter films.

This magical scrapbook features detailed profiles on the creatures of the Wizarding World, including concept art and behind-the-scenes photography, giving fans an in-depth look at Dark creatures such as the Basilisk that resides in the Chamber of Secrets; beloved creature companions like Hedwig, Fawkes, Fang; and everything in between. Filled with filmmaking secrets, this unique volume brings the creatures from the Harry Potter films to life like never before. Packed with removable stickers, posters, and more, Harry Potter: Magical Creatures: A Movie Scrapbook is destined to be a must-have collectible for fans of Harry Potter.

» Have you read this book? We'd like to know what you think about it - write a review about Harry Potter: Magical Creatures: A Movie Scrapbook book by Jody Revenson and you'll earn 50c in Boomerang Bucks loyalty dollars (you must be a Boomerang Books Account Holder - it's free to sign up and there are great benefits!)

A Preview for this title is currently not available.
More Books By Jody Revenson
View All