Part of a six-volume series of the best in classic horror, selected by Academy award-winning director Guillermo del Toro.

Part of a new six-volume series of the best in classic horror, selected by Academy Award-winning director ofThe Shape of WaterGuillermo del Toro

Filmmaker and longtime horror literature fan Guillermo del Toro serves as the curator for the Penguin Horror series, a new collection of classic tales and poems by masters of the genre. Included here are some of del Toro's favorites, from Mary Shelley'sFrankensteinand Ray Russell's short story "Sardonicus," considered by Stephen King to be "perhaps the finest example of the modern Gothic ever written," to Shirley Jackson'sThe Haunting of Hill Houseand stories by Ray Bradbury, Joyce Carol Oates, Ted Klein, and Robert E. Howard. Featuring original cover art by Penguin Art Director Paul Buckley, these stunningly creepy deluxe hardcovers will be perfect additions to the shelves of horror, sci-fi, fantasy, and paranormal aficionados everywhere.

Haunted Castlesis the definitive, complete collection of Ray Russell's masterful Gothic horror stories, including the famously terrifying novella trio of "Sardonicus," "Sanguinarius," and"Sagittarius." The characters that sprawl throughHaunted Castlesare frightful to the core- the heartless monster holding two lovers in limbo; the beautiful dame journeying down a damned road toward depravity (with the help of an evil gypsy); the man who must wear his fatal crimes on his face in the form of an awful smile. Engrossing, grotesque, perverted, and completely entrancing, Russell's Gothic tales are the best kind of dreadful. 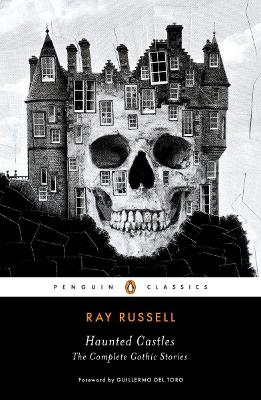 » Have you read this book? We'd like to know what you think about it - write a review about Haunted Castles book by Ray Russell and you'll earn 50c in Boomerang Bucks loyalty dollars (you must be a Boomerang Books Account Holder - it's free to sign up and there are great benefits!)

RAY RUSSELL was born in 1924 in Chicago, Illinois, and served in the United States Air Force during World War II in the South Pacific. After the war, he attended the Chicago Conservatory of Music and eventually joined the editorial staff at Playboy, where he published such writers as Ray Bradbury, Kurt Vonnegut, Richard Matheson, Jack Finney, Robert Bloch, and Charles Beaumont. His best-known work, 'Sardonicus', was called by Stephen King 'perhaps the finest example of the modern Gothic ever written'. He died in Los Angeles in 1999. GUILLERMO DEL TORO is a Mexican director, producer, screenwriter, novelist, and designer, most famous for his Academy Award-winning film, Pan's Labyrinth, and the Hellboy film franchise. He has received the Nebula, Hugo, and Bram Stoker awards and is an avid collector and student of arcane memorabilia and weird fiction.

A Preview for this title is currently not available.
More Books By Ray Russell
View All