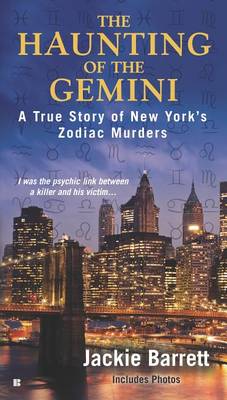 The Haunting of the Gemini

Description - The Haunting of the Gemini by Jackie Barrett

On a sweltering summer day in 1992, the body of Patricia Fonti was found in the Brooklyn neighborhood of Highland Park.

She had been stabbed more than 100 times.

The Zodiac Killer had struck again.

Renowned psychic medium Jackie Barrett is no stranger to visits from the dead. But when the spirit of Patricia Fonti comes to her twenty years after her death, Jackie finds herself caught in an unexpected battle for the restless, schizophrenic soul of a murder victim. Here is Jackie's first-person account of her connection with Patricia Fonti and her murderer, New York Zodiac Killer Heriberto "Eddie" Seda, whose early 1990s killing spree paralyzed the city with fear.

In exclusive letters, drawings and recorded telephone conversations from prison, Eddie divulges things to Jackie that have never been made public, including how he killed and why. Her astounding interviews with the man who calls himself "The Soul Collector" give rare insight into the recesses of a very dark mind. And while Jackie struggles to help Patricia Fonti find peace, Eddie insists he and Jackie are two halves of a whole, that together they make up the astrological sign of the twins-the Gemini...

Buy The Haunting of the Gemini by Jackie Barrett from Australia's Online Independent Bookstore, Boomerang Books.


Book Reviews - The Haunting of the Gemini by Jackie Barrett

» Have you read this book? We'd like to know what you think about it - write a review about Haunting of the Gemini book by Jackie Barrett and you'll earn 50c in Boomerang Bucks loyalty dollars (you must be a Boomerang Books Account Holder - it's free to sign up and there are great benefits!)

For more than two decades, internationally renowned psychic Jackie Barrett has been amazing television, radio and guest audiences with her ability to communicate with the deceased. Unlike a typical medium, Jackie's unique ability allows her clients to interact directly with the dead. Her client list includes A-list celebrities, notable politicians, professional athletes and business leaders. She has a legion of faithful believers, including various crime fighting units all over the globe, and her sterling reputation has gained her an honorary Captain's badge from the NYPD. Jackie is one of the world s leading experts on occult crimes, and her investigations in that area have taken her to the darkest corners of humanity. Jackie is the author of The Devil I Know, and has appeared on A&E, Bio, WE, MTV, Lifetime, E! and the Travel Channel, as well as on radio and in numerous newspapers and magazines."

A Preview for this title is currently not available.
More Books By Jackie Barrett
View All