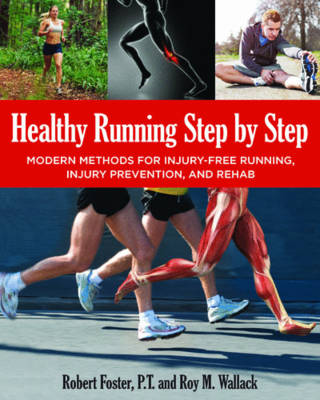 Healthy Running Step by Step will help runners of all ages and abilities understand why running injuries occur, how to prevent them, and how to speed up recovery. Injuries plague the majority of runners, wrecking training plans and cutting running careers short by decades, but they are not inevitable. Authors Robert Forster, P.T., and Roy M. Wallack explain that nearly all running injuries can be rehabilitated quicker and even avoided altogether with the right training, strengthening, stretching, running form, and diet strategy.

Drawing from Forster's three decades of training and treating Olympic athletes and more than 10,000 runners at his award-winning Santa Monica, California, physical therapy and high-performance centers, this book emphasizes that better performance is inextricably bound to injury reduction and that a comprehensive, science-based training plan with built-in anti-injury insurance must include these crucial elements:Periodization training, Proper technique and footwear, Nutrition Posture and flexibility, Strength training.

This book also includes detailed, step-by-step rehabilitation matrixes for the five most common running injuries: IT band syndrome, Achilles tendonitis, shin splints, plantar fasciitis, and hamstring injuries. Using these unique matrixes as your guide, you'll recover from injuries more quickly and understand what you need to do to prevent their reoccurrence. Healthy Running Step by Step is a must-have guide if you've ever been injured, are recovering from an injury, want to prevent injuries, or run injury-free for decades to come.

» Have you read this book? We'd like to know what you think about it - write a review about Healthy Running Step by Step book by Robert Forster and you'll earn 50c in Boomerang Bucks loyalty dollars (you must be a Boomerang Books Account Holder - it's free to sign up and there are great benefits!)

Roy M. Wallack is a Los Angeles Times health and fitness columnist and former editor of Triathlete and Bicycle Guide magazines. A participant some of the world's toughest running, cycling, and multisport events, including the Boston Marathon, Badwater UltraMarathon, Eco-Challenge, La Ruta de los Conquistadores, and TransRockies Run, he finished second in the World Fitness Championship in 2004. Wallack has written for Outside, Men's Journal, Runner's World, Competitor, Bicycling, Mountain Bike, and authored The Traveling Cyclist: 20 Worldwide Tours of Discovery and Bike for Life: How to Ride to 100, an athletic longevity plan for cyclists. Robert Forster, PT, has practiced Sports Physical Therapy in Santa Monica, CA, for 31 years. Robert has lectured throughout the US and Europe on Sports Rehabilitation and safety in exercise. Robert served as a private physical therapist at four Olympic Games for Olympians Jackie Joyner-Kersee, Florence Flo-Jo Joyner, Alyson Felix and their teammates who have won a combined 32 Olympic Medals under his direct care. He also worked pro athletes Pete Sampras, Kobe Bryant, Elton Brand, Maria Sharapova, as well as M.M.A. champions including B.J. Penn. Robert has published several articles in the scientific press and co-authored The Complete Water Power Workout Book . He has also written a regular column in Triathlete magazine, appeared in several episodes of the popular 'Fit to Hit' series on the Tennis Channel and recently created the Herbalife 24 Fit Exercise Video for the world's leading weight loss company.

A Preview for this title is currently not available.
More Books By Robert Forster
View All