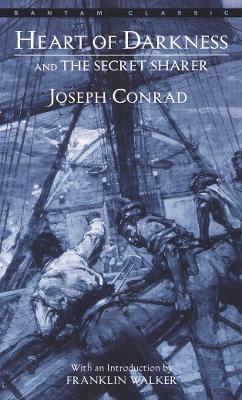 Heart Of Darkness. The story of the civilized, enlightened Mr. Kurtz who embarks on a harrowing "night journey" into the savage heart of Africa, only to find his dark and evil soul. The Secret Sharer. The saga of a young, inexperienced skipper forced to decide the fate of a fugitive sailor who killed a man in self-defense. As he faces his first moral test the skipper discovers a terrifying truth -- and comes face to face with the secret itself. Heart Of Darkness and The Secret Sharer draw on actual events and people that Conrad met or heard about during his many far-flung travels. In portraying men whose incredible journeys on land and at sea are also symbolic voyages into their own mysterious depths, these two masterful works give credence to Conrad's acclaim as a major psychological writer.

» Have you read this book? We'd like to know what you think about it - write a review about Heart Of Darkness/Secret Share book by Joseph Conrad and you'll earn 50c in Boomerang Bucks loyalty dollars (you must be a Boomerang Books Account Holder - it's free to sign up and there are great benefits!)

Conrad was born on 12/3/1857, in a part of Russia that had once belonged to Poland. His parents were members of the landed gentry, but as ardent Polish patriots they suffered considerably for their political views. Orphaned at 11, Conrad attended school in Cracow but concluded that there was no future for him in occupied Poland, and at 16 he left forever. The sea was Conrad's love and career for the next 20 years; in the British merchant navy, he rose finally to captain, sailing to Australia and Borneo and surviving at least one shipwreck. In 1890 he became captain of a Congo River steamer, but this led only to disillusionment and ill health and this would become the basis for Conrad's masterpiece, Heart of Darkness. Reluctantly leaving the merchant service, he settled in England and completed his first novel, Almayer's Folly, already begun at sea. His subsequent works, many of which drew upon his sea experiences, include The Nigger of the "Narcissus" (1897), Lord Jim (1900), Nostromo (1904), The Secret Agent (1907), The Secret Sharer (1910), and Chance (1913). The man who was 21 before he spoke a word of English is now regarded as one of the superb English stylists of all time. Conrad died at his desk in 1924.