The Heart of Yoga

Description - The Heart of Yoga by T.K.V. Desikachar

The first yoga text to outline a step-by-step sequence for developing a complete practice according to viniyoga--yoga adapted to the needs of the individual.

* A contemporary classic by a world-renowned teacher.

* This new edition adds thirty-two poems by Krishnamacharya that capture the essence of his teachings.

In The Heart of Yoga Desikachar offers a distillation of his father's system as well as his own practical approach, which he describes as "a program for the spine at every level--physical, mental, and spiritual." This is the first yoga text to outline a step-by-step sequence for developing a complete practice according to the age-old principles of yoga. Desikachar discusses all the elements of yoga--poses and counterposes, conscious breathing, meditation, and philosophy--and shows how the yoga student may develop a practice tailored to his or her current state of health, age, occupation, and lifestyle.

This is a revised edition of The Heart of Yoga.


Book Reviews - The Heart of Yoga by T.K.V. Desikachar

» Have you read this book? We'd like to know what you think about it - write a review about Heart of Yoga book by T.K.V. Desikachar and you'll earn 50c in Boomerang Bucks loyalty dollars (you must be a Boomerang Books Account Holder - it's free to sign up and there are great benefits!)

A structural engineer by training, T. K. V. Desikachar lived and studied with his father until Krishnamacharya's death in 1989. He has devoted his life to yoga instruction for people of all backgrounds and all levels of ability and currently teaches at the school founded in his father's memory in Madras, as well as in Europe, the United States, Australia, and New Zealand. 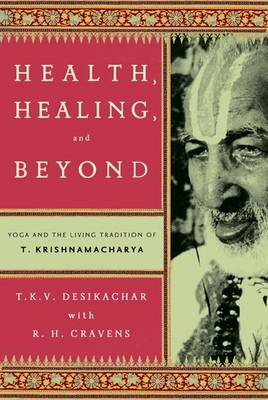