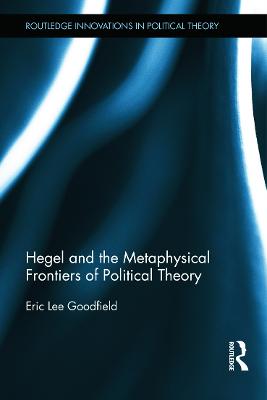 Hegel and the Metaphysical Frontiers of Political Theory

Toward a Metaphysics of the Social

For over one hundred and fifty years G.W.F. Hegel's ghost has haunted theoretical understanding and practice. His opponents first, and later his defenders, have equally defined their programs against and with his. In this way Hegel's political thought has both situated and displaced modern political theorizing.

This book takes the reception of Hegel's political thought as a lens through which contemporary methodological and ideological prerogatives are exposed. It traces the nineteenth century origins of the positivist revolt against Hegel's legacy forward to political science's turn away from philosophical tradition in the twentieth century. The book critically reviews the subsequent revisionist trend that has eliminated his metaphysics from contemporary considerations of his political thought. It then moves to re-evaluate their relation and defend their inseparability in his major work on politics: the Philosophy of Right. Against this background, the book concludes with an argument for the inherent metaphysical dimension of political theorizing itself. Goodfield takes Hegel's reception, representation, as well as rejection in Anglo-American scholarship as a mirror in which its metaphysical presuppositions of the political are exceptionally well reflected. It is through such reflection, he argues, that we may begin to come to terms with them.

This book will be of great interest to students, scholars, and readers of political theory and philosophy, Hegel, metaphysics and the philosophy of the social sciences. » Have you read this book? We'd like to know what you think about it - write a review about Hegel and the Metaphysical Frontiers of Political Theory book by Eric Lee Goodfield and you'll earn 50c in Boomerang Bucks loyalty dollars (you must be a Boomerang Books Account Holder - it's free to sign up and there are great benefits!)

A Preview for this title is currently not available.
More Books By Eric Lee Goodfield
View All

Hegel and the Metaphysical Frontiers of Political Theory
$90.08 $90.99