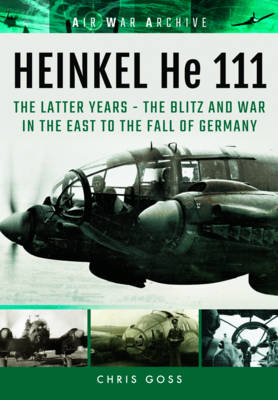 Description - Heinkel He 111 by Chris Goss

The Heinkel He 111 was the main work-horse of the Luftwaffe's bomber force throughout much of the Second World War. Consequently, when Hitler launched Operation Barbarossa in June 1941, three entire Kampfgeschwader consisted of He 111s. Initially used as direct support for the German ground forces, as the campaign progressed the He 111 was switched to attacking the Soviet infrastructure, particularly trains and marshalling yards, and used as a transport aircraft taking in supplies and for troop evacuation. Variants of the He 111 were used in anti-shipping roles, in both the Atlantic and the Mediterranean, and even for aerial launching of V-1 flying bombs, continuing the war against the towns and cities of the United Kingdom. In this selection of unrivalled images collected over many years, and now part of Frontline's new War in the Air series, the operations of this famous aircraft in the latter years of the Second World War are portrayed and brought to life. A companion title to 'Heinkel He 111: The Early Years'. AUTHOR: Having retired from the RAF with the rank of Wing Commander, Chris Goss is a regular and highly sought after contributor to major aviation publications in the UK, France and Germany, as well the author of fourteen critically acclaimed books covering the air war between 1939 and 1945. Chris completed an MA with Merit in War Studies in 2001. SELLING POINTS: The main German bomber at the start of the invasion of the Soviet Union Used to carry air-launched V-1s. A unique collection of photographs of the type, many of which have never been published before. Illustrated

Other Editions - Heinkel He 111 by Chris Goss 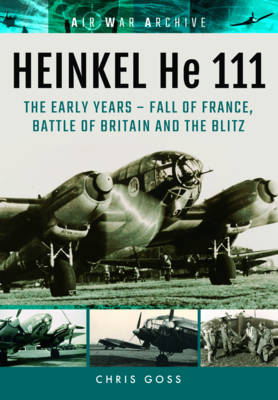 » Have you read this book? We'd like to know what you think about it - write a review about Heinkel He 111 book by Chris Goss and you'll earn 50c in Boomerang Bucks loyalty dollars (you must be a Boomerang Books Account Holder - it's free to sign up and there are great benefits!)


A Preview for this title is currently not available.
More Books By Chris Goss
View All

Luftwaffe Training Aircraft: The Training of Germany's Pilots and Aircrew Through Rare Archive Photographs
No Stock on Hand, Supplier Has No Due Date for Supply.
$35.99 $39.99