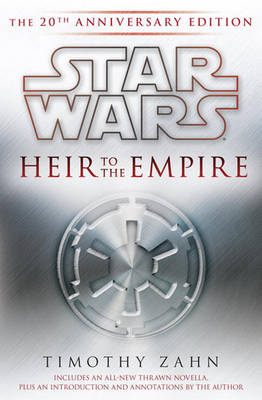 » Have you read this book? We'd like to know what you think about it - write a review about Heir to the Empire: Star Wars Legends book by Timothy Zahn and you'll earn 50c in Boomerang Bucks loyalty dollars (you must be a Boomerang Books Account Holder - it's free to sign up and there are great benefits!)

Since 1978 Timothy Zahn has written nearly seventy short stories and novelettes, numerous novels, and three short fiction collections, and won the Hugo Award for best novella. Timothy Zahn is best known for his Star Wars novels: Heir to the Empire, Dark Force Rising, The Last Command, Specter of the Past, Vision of the Future, Survivor's Quest, Outbound Flight, and Allegiance, and has more than four million copies in print. His most recent publications have been the science fiction Cobra series and the six-part young adult series Dragonback. He has a B.S. in physics from Michigan State University, and an M.S. in physics from the University of Illinois. He lives with his family on the Oregon coast.