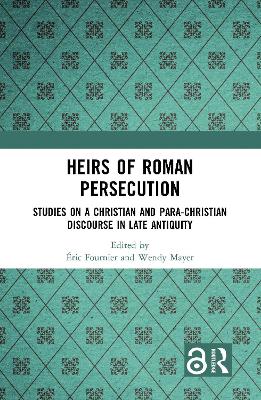 Heirs of Roman Persecution: Studies on a Christian and Para-Christian Discourse in Late Antiquity

Description - Heirs of Roman Persecution: Studies on a Christian and Para-Christian Discourse in Late Antiquity by Eric Fournier

The subject of this book is the discourse of persecution used by Christians in Late Antiquity (c. 300-700 CE).

Through a series of detailed case studies covering the full chronological and geographical span of the period, this book investigates how the conversion of the Roman Empire to Christianity changed the way that Christians and para- Christians perceived the hostile treatments they received, either by fellow Christians or by people of other religions. A closely related second goal of this volume is to encourage scholars to think more precisely about the terminological difficulties related to the study of persecution. Indeed, despite sustained interest in the subject, few scholars have sought to distinguish between such closely related concepts as punishment, coercion, physical violence, and persecution. Often, these terms are used interchangeably. Although there are no easy answers, an emphatic conclusion of the studies assembled in this volume is that "persecution" was a malleable rhetorical label in late antique discourse, whose meaning shifted depending on the viewpoint of the authors who used it.

This leads to our third objective: to analyze the role and function played by rhetoric and polemic in late antique claims to be persecuted. Late antique Christian writers who cast their present as a repetition of past persecutions often aimed to attack the legitimacy of the dominant Christian faction through a process of othering. This discourse also expressed a polarizing worldview in order to strengthen the group identity of the writers' community in the midst of ideological conflicts and to encourage steadfastness against the temptation to collaborate with the other side.

Book Reviews - Heirs of Roman Persecution: Studies on a Christian and Para-Christian Discourse in Late Antiquity by Eric Fournier

» Have you read this book? We'd like to know what you think about it - write a review about Heirs of Roman Persecution: Studies on a Christian and Para-Christian Discourse in Late Antiquity book by Eric Fournier and you'll earn 50c in Boomerang Bucks loyalty dollars (you must be a Boomerang Books Account Holder - it's free to sign up and there are great benefits!)