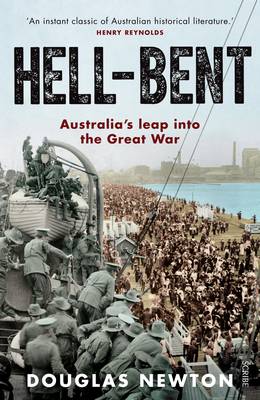 Most histories of Australia's Great War rush their readers into the trenches. This history is very different. For the first time, it examines events closely, even hour-by-hour, in both Britain and Australia during the last days of peace in July - August 1914. London's choice for war was a very close-run thing. At the height of the diplomatic crisis leading to war, it looked very much like Britain would choose neutrality. Only very late in the evening of Tuesday 4 August did a small clique in the British cabinet finally engineer a declaration of war against Germany. Meanwhile, Australia's political leaders, deep in the throes of a federal election campaign, competed with each other in a love-of-empire auction. They leapt ahead of events in London. At the height of the diplomatic crisis, they offered to transfer the brand-new Royal Australian Navy to the British Admiralty. Most importantly, on Monday 3 August, an inner group of the Australian cabinet, egged on by the governor-general, offered an expeditionary force of 20,000 men, to anywhere, for any objective, under British command, and with the whole cost to be borne by Australia - some forty hours before the British cabinet made up its mind. Australia's leaders thereby lost the chance to set limits, to weigh objectives, or to insist upon consultation. They needlessly exposed Australian soldiers and their families to the full horror of the mechanised slaughter that was to come. They were hell-bent - and they got there. 'An original and disturbing account of . . . the nation's premature leap into war. Meticulously researched and engagingly written, Hell-Bent highlights the dire logic of a self-governing colonial Australia and the profound cost of the burden of empire.' Marilyn Lake 'Douglas Newton's Hell-Bent superbly captures the drama, naivety, and tragedy of the worlds catastophic plunge into war in 1914, reminding us of citizens' vulnerability - then and now - to political manipulation and deception in matters of war and peace.' Frank Bongiorno

» Have you read this book? We'd like to know what you think about it - write a review about Hell-Bent: Australia's Leap Into The Great War book by Douglas Newton and you'll earn 50c in Boomerang Bucks loyalty dollars (you must be a Boomerang Books Account Holder - it's free to sign up and there are great benefits!)

A Preview for this title is currently not available.
More Books By Douglas Newton
View All