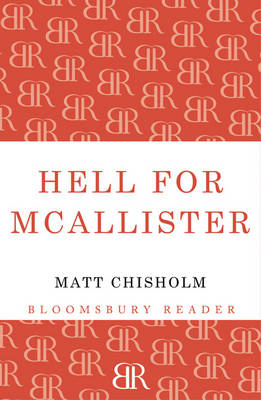 He was fast with a gun-but was this fast enough to stay alive? McAllister's Gun was fast. And with the kind of life he led, it had to be. When the brutal Dolfin gang strung up his friend, McAllister added a hungry desire for vengeance to his speed with a gun. A mixture that was to prove lethal for the killers when McAllister, bent on revenge, headed into the dark hill country that was the Dolfins' hide-out...Another rigger-taut tale of Rem McAllister, Matt Chisholm's legendary hero of the Old West.

» Have you read this book? We'd like to know what you think about it - write a review about Hell for McAllister book by Matt Chisholm and you'll earn 50c in Boomerang Bucks loyalty dollars (you must be a Boomerang Books Account Holder - it's free to sign up and there are great benefits!)

Peter Watts (1919-1983) was born in London and used Matt Chisholm as a pseudonym for a series of his popular western novels. Watts first become a Civil Servant before he co-founded the Electro Acupuncture Voluntary Society of Britain and Ireland. It was here that he began to write for two official magazines although he soon branched into fiction. For more than a quarter of a century Watts had success with his novels under the names of Matt Chisholm, Cy James and Luke Jones. His first novel Out of Yesterday was published in 1950. Watts created the character Rem McAllister who appeared in over thirty Matt Chisholm books, starting in 1963 with The Hard Men.

A Preview for this title is currently not available.
More Books By Matt Chisholm
View All