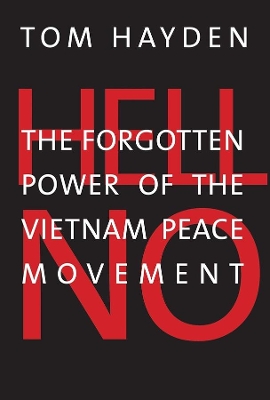 The Forgotten Power of the Vietnam Peace Movement

Description - Hell No by Tom Hayden

Why those who protested the Vietnam War must be honored, remembered, and appreciated

"Hell no" was the battle cry of the largest peace movement in American history-the effort to end the Vietnam War, which included thousands of veterans. The movement was divided among radicals, revolutionaries, sectarians, moderates, and militants, which legions of paid FBI informants and government provocateurs tried to destroy. Despite these obstacles millions marched, resisted the draft on campuses, and forced two sitting presidents from office. This movement was a watershed in our history, yet today it is in danger of being forgotten, condemned by its critics for everything from cowardice to stab-in-the-back betrayal.

In this indispensable essay, Tom Hayden, a principal anti-Vietnam War organizer, calls to account elites who want to forget the Vietnam peace movement and excoriates those who trivialize its impact, engage in caricature of protesters and question their patriotism. In so doing, he seeks both a reckoning and a healing of national memory.]]>

» Have you read this book? We'd like to know what you think about it - write a review about Hell No book by Tom Hayden and you'll earn 50c in Boomerang Bucks loyalty dollars (you must be a Boomerang Books Account Holder - it's free to sign up and there are great benefits!)

Tom Hayden, an educator, former California state senator, author, and lifelong activist, was the principal author, in 1962, of the Port Huron Statement, the founding manifesto of Students for a Democratic Society (SDS). He died in Santa Monica on October 23, 2016.

A Preview for this title is currently not available.
More Books By Tom Hayden
View All

Inspiring Participatory Democracy
No Stock on Hand, Supplier Has No Due Date for Supply.
$207.90 $231.00