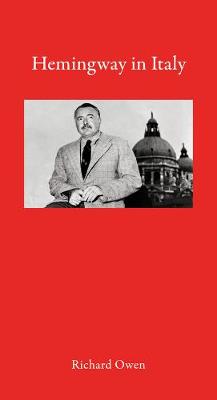 Ernest Hemingway is most often associated with Spain, Cuba, and Florida, but Italy was equally important in his life and work. This book, the first full-length study on the subject, explores Hemingway's visits throughout his life to such places as Sicily, Genoa, Rapallo, Cortina, and Venice.

Richard Owen describes how Hemingway first visited Italy during World War I, an experience that set the scene for A Farewell to Arms. The writer then returned after World War II, where he would find inspiration for Across the River and into the Trees. When Men without Women was published, some reviewers declared Hemingway to be at heart a reporter preoccupied with bullfighters, soldiers, prostitutes, and hard drinkers, but their claims failed to note that he also wrote sensitively and passionately about love and loss against an Italian backdrop. Owen highlights the significance of Italy in the writer's life. On the night he shot himself in July 1961, for example, Hemingway sang a song he had once learned in Cortina d'Ampezzo.

Hemingway returned to Italy again and again, and the places he visited or used as inspiration for his work are many. At the same time, the inspiration goes both ways: Owen describes how the fifteenth century villa Ca' Erizzo at Bassano del Grappa, where the American Red Cross ambulances were stationed, is now a museum devoted to the writer and World War I. Showing how the Italian landscape, from the Venetian lagoon to the Dolomites and beyond, deeply affected one of the greatest writers of the twentieth century, Hemingway in Italy demonstrates that this country belongs alongside Spain as a key influence on his writing-and why the Italian themselves took Hemingway and his writing to heart.

Other Editions - Hemingway in Italy by Richard Owen » Have you read this book? We'd like to know what you think about it - write a review about Hemingway in Italy book by Richard Owen and you'll earn 50c in Boomerang Bucks loyalty dollars (you must be a Boomerang Books Account Holder - it's free to sign up and there are great benefits!)

Richard Owen was the Rome correspondent for the Times (UK) for fifteen years. His books include Lady Chatterley s Villa: D. H. Lawrence on the Italian Riviera, also published by Haus Publishing."

A Preview for this title is currently not available.
More Books By Richard Owen
View All

Descriptive and Illustrated Catalogue of the Physiological Series of Comparative Anatomy Contained in the Museum of the Royal College of Surgeons in London ...; Volume 4
$94.66 $105.18

Odontography; Or, a Treatise on the Comparative Anatomy of the Teeth; Their Physiological Relations, Mode of Development, and Microscopic Structure, in the Vertebrate Animals Volume; Volume 2
$103.48 $114.98

Lectures on the Comparative Anatomy and Physiology of the Invertebrate Animals: Delivered at the Royal College of Surgeons
$121.11 $134.57