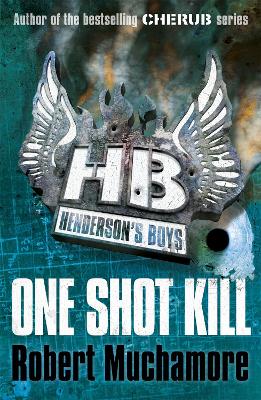 Spring, 1943. The war is turning against Germany, but Hitler isn't giving up. In a secret bunker deep in occupied France, scientists are hard at work on Hitler's latest deadly weapon: code name FZG-76.Back in England Henderson's boys will need to undergo advanced sniper training if they've any chance of infiltrating the bunker. Parachuting into occupied France, they track down a secret dossier filled with invaluable material - and uncover the meaning of the enigmatic code. For official purposes, these children do not exist.

» Have you read this book? We'd like to know what you think about it - write a review about Henderson's Boys: One Shot Kill book by Robert Muchamore and you'll earn 50c in Boomerang Bucks loyalty dollars (you must be a Boomerang Books Account Holder - it's free to sign up and there are great benefits!)

Robert Muchamore was born in Islington in 1972 and spent thirteen years working as a private investigator. He loves Arsenal and watching people fall down holes. He hates swimming and getting chased by cows. He was inspired to start writing by his nephews` complaints about the lack of anything for them to read! The CHERUB series has now become a number one bestseller in several countries. For more information, go to www.muchamore.com.