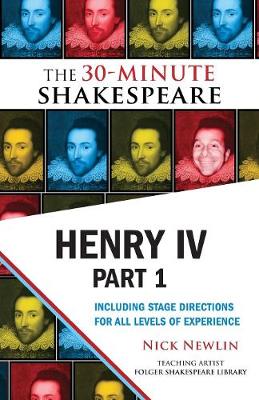 King Henry IV, Part I: The 30-Minute Shakespeare combines comedy, tragedy, and history into a rollicking six-scene drama performable in a half hour.

This adaptation includes tavern revelry, highway robbery, and the telling role-reversal scene between the inimitable Falstaff and young Prince Hal.

The play also features the rivalry between Glendower and Hotspur and the touching reconciliation between King Henry IV and his son Hal. The action climaxes with the riveting battle scene, and includes as a coda the new King Henry V's brutal rejection of his former friend Falstaff.

The edition includes helpful advice by Nick Newlin on how to put on a Shakespeare production in a high school class with novice actors, as well as tips for performing the specific play and recommendations for further resources.

» Have you read this book? We'd like to know what you think about it - write a review about Henry IV, Part 1: The 30-Minute Shakespeare book by Nick Newlin and you'll earn 50c in Boomerang Bucks loyalty dollars (you must be a Boomerang Books Account Holder - it's free to sign up and there are great benefits!)

Nick Newlin: Nick Newlin has performed a juggling and variety act for international audiences for 23 years. Since 1996, he has conducted an annual Play Directing residency affiliated with the Folger Shakespeare Library in Washington, DC. Nick has a BA from Harvard University with Honors 1982 and an MA in Theater from The University of Maryland with an emphasis on Play Directing.

A Preview for this title is currently not available.
More Books By Nick Newlin
View All