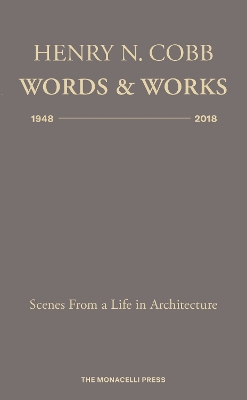 The first book dedicated to the career of the preeminent American architect, Henry N. Cobb.

As a builder, teacher, and mentor, Henry N. Cobb has been one of the most eloquent voices in architecture for well over half a century. A founding partner of Pei Cobb Freed & Partners, where he has worked actively and continuously since its inception in 1955, his practice encompasses a wide variety of building types, with works and projects across the world that resound in the public imagination and have garnered awards for design excellence. Cobb's sensitivity to place and use generate surprising and unparalleled forms in educational and civic buildings--such as the Portland Museum of Art in Maine, the Anderson School of Management at UCLA, the John Joseph Moakley U.S. Courthouse in Boston, and Palazzo Lombardia in Milan--or in corporate and commercial projects, such as the John Hancock Tower in Boston, Fountain Place Tower in Dallas, Tour EDF at La Defense in Paris, and Four Seasons Hotel and Residences at One Dalton, now under construction in Boston.

Henry N. Cobb- Words & Works- 1948-2018 is his first book, uniquely combining poetic analyses of his distinguished works with essays, interviews, and transcripts of lectures and convenings that cover the gamut of topics about architecture's past, present, and future. A longtime educator--and chair of the Harvard Graduate School of Design from 1980 to 1985--Cobb takes up his extensive subject matter in a characteristically thoughtful and engaging manner. The book is packaged as a gem; a modest, portable trim size that harks back to the classic Library of America series. To anyone interested in the development of American architecture in its transition from modernism to postmodernism and into the era of high-tech starchitecture, there are a number of treasures here to discover. Henry N. Cobb is a landmark survey--in works and words--of one of the great architects of our time.

» Have you read this book? We'd like to know what you think about it - write a review about Henry N. Cobb: Words and Works 1948-2018: Scenes from a Life in Architecture book by Henry N. Cobb and you'll earn 50c in Boomerang Bucks loyalty dollars (you must be a Boomerang Books Account Holder - it's free to sign up and there are great benefits!)


A Preview for this title is currently not available.
More Books By Henry N. Cobb
View All