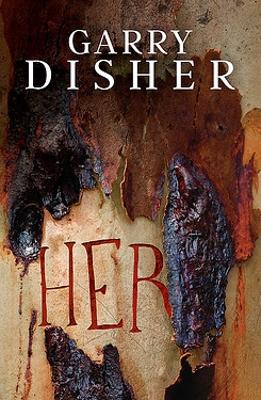 Description - Her by Garry Disher

Out in that country the sun smeared the sky and nothing ever altered, except that one day a scrap man came by . . . HER name is scarcely known or remembered. All in all, she is worth less than the nine shillings and sixpence counted into her father's hand.She bides her time. She does her work.Way back in the corner of her mind is a thought she is almost too frightened to shine a light on: one day she will run away.A dark and unsettling tale from the turn of the twentieth century by a master of Australian literature.

Other Editions - Her by Garry Disher 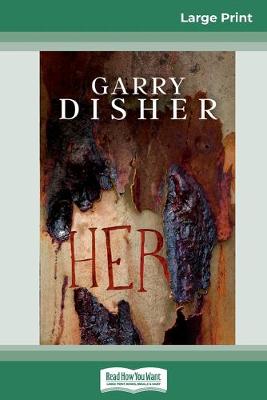 Book Reviews - Her by Garry Disher

» Have you read this book? We'd like to know what you think about it - write a review about Her book by Garry Disher and you'll earn 50c in Boomerang Bucks loyalty dollars (you must be a Boomerang Books Account Holder - it's free to sign up and there are great benefits!)

5 stars “Love in this family was inconvenient, insupportable and unwelcome. No one knew precisely what love was. All Lily knew was that she loved Hazel. Hazel her sister, a receptacle of love.”

Her is a stand-alone novel by award-winning Australian author, Garry Disher. When she is three, the scrap man buys Her from her father for nine shillings and sixpence. She joins Wife and Big Girl. They have all been bought like slaves and are used like slaves, for labour and, when he judges them old enough, for his sexual gratification. By the time she is six, she has been trained up enough to accompany him on his tinker’s wagon, collecting scrap metal, repairing pots and trying to sell the shoddy goods they all put together from flour bags and fencing wire and whatever else they can scrounge, beg, trap or steal.

It’s the very early nineteen-hundreds, and in back country Victoria, for isolated families, the tinker’s van is not an uncommon sight, representing the opportunity to both buy and sell. Poverty-stricken families with nothing else to sell and too many mouths to feed might just resort to this drastic deed to ease both.

Disher’s unnamed protagonist soon learns that her new father, this scrap man, is lazy, violent and cruel, both physically and mentally: “Pull a long face and carry on” is his maxim. What little cash they do make is often spent on grog and whores. All three of his possessions know how to behave if caught unawares by the Social, the Education, the Police or those church do-gooders: say nothing and act dumb. Escape is only a dream.

Disher easily captures the backblocks of Victoria in the early twentieth century, and the attitudes of the time. His main character is well-portrayed: her attachment to the only family she can remember having, who are all under scrap man’s control and equally afraid of doing anything to upset him. Her conflict at hating him yet wanting to be his favourite, and her jealousy of her “sister”, not unexpected. But her endurance, resourcefulness and resilience do engender some hope for her future.

Using some exquisite prose, Disher gives the reader an unvarnished tale of hardship; an unsettling story that, for all its bleakness, is a powerful read. This edition also includes reading group notes and a suggested bibliography. With thanks to Hachette Australia and the author for this copy to read and review.

GARRY DISHER grew up on a wheat and wool farm in South Australia. He has an MA in Australian History and has lived, worked and travelled in England, Italy, Israel, the USA and southern Africa. In 1978 he was awarded a creative writing fellowship to Stanford University, where he wrote his first collection of short stories. Garry worked as a writing lecturer between the years 1980 and 1988, before becoming a full-time writer. He has published over fifty books, including short story collections, literary novels, writers' handbooks and award-winning crime thrillers and children's titles.