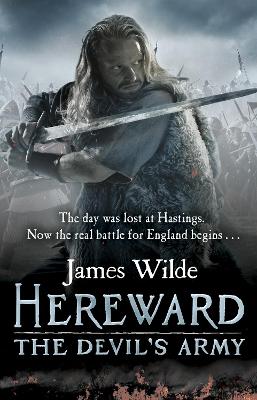 The story of Hereward continues in this action-packed, brutal and bloody novel - a must read for fans of Bernard Cornwell and Conn Iggulden."An author who really does deliver the goods...I've relished every page so far and I am left hungry for more. If you're a fan of historical fiction... you need to be reading James Wilde." -- THE ELOQUENT PAGE"Unforgettable...James Wilde has succeeded in turning Hereward into a vital, living, breathing, death-dealing, honest, fallible, believable human being. A worthy adversary for William and the Normans." -- SPEESH"I couldn't put it down!" - ***** Reader review. "A real page-turner and I read the Devil's Army in two days..." -- ***** Reader review.******************************************************NOW THE REAL BATTLE FOR ENGLAND BEGINS...1067- The Battle of Hastings is lost and England is in the grips of William The Bastard, a cruel king set upon imposing his will on the unruly nation.But there is one who stands in his way. Hereward- a warrior; a shrewd and ruthless fighter; England's last hope.His army of outcasts - a devil's army - grows by the day and emerges at night leaving death in its wake. The Normans will do whatever it takes to crush the rebels - but the rebels have no plans to surrender...Hereward- The Devil's Army is the second book in James Wilde's six book Hereward series. His story continues in Hereward- End of Days. Have you read Hereward - the first book in the series?

» Have you read this book? We'd like to know what you think about it - write a review about Hereward: The Devil's Army book by James Wilde and you'll earn 50c in Boomerang Bucks loyalty dollars (you must be a Boomerang Books Account Holder - it's free to sign up and there are great benefits!)

James Wilde is a Man of Mercia. Raised in a world of books, the author studied economic history at university before travelling the world in search of adventure. Unable to forget a childhood encounter - in the pages of a comic - with the great English warrior, Hereward, Wilde returned to the haunted fenlands of Eastern England, Hereward's ancestral home, where he became convinced that this legendary hero should be the subject of his first novel. Wilde indulges his love of history and the high life in the home his family have owned for several generations in the heart of a Mercian forest.

A Preview for this title is currently not available.
More Books By James Wilde
View All