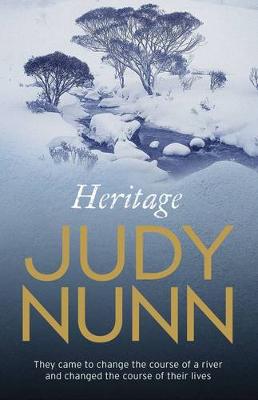 In a time when desperate people were seizing with both hands the chance for freedom, refugees from more than seventy nations gathered beneath the Southern Cross to forge a new national identity. They came from all over wartorn Europe to the mountains of Australia to help realise one man's dream- the mighty Snowy Mountains Hydro-Electric Scheme, one of the greatest engineering feats of the 20th century.

People of all races and creeds tunnelled through a mountain range to turn the course of a majestic river, trying to put to rest ghosts from the inferno of history- buried memories, unimaginable pain and deadly secrets.

From the ruins of Berlin to the birth of Israel, from the Italian Alps to the Australian high country, Heritage is a passionate and fast-paced tale of rebirth, struggle, sacrifice and redemption, and a tribute to those who gave meaning to the Australian spirit.

Other Editions - Heritage by Judy Nunn » Have you read this book? We'd like to know what you think about it - write a review about Heritage book by Judy Nunn and you'll earn 50c in Boomerang Bucks loyalty dollars (you must be a Boomerang Books Account Holder - it's free to sign up and there are great benefits!)