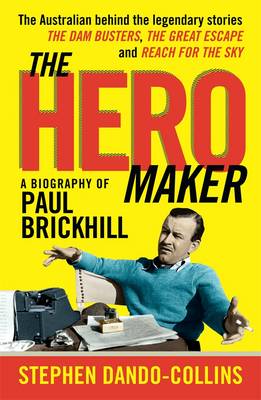 A Biography of Paul Brickhill, The

It was 1956 and the writer from Sydney's lower North Shore had every reason to feel blessed. Former journalist Paul Brickhill was the highest-earning author in the UK and two of his bestselling books - The Dam Busters and Reach for the Sky - had recently been made into blockbuster films. Another of his books - inspired by his experiences as a prisoner of war in Stalag Luft 3 in Germany during the Second World War - was attracting Hollywood interest. That book was The Great Escape.

Yet, life for the enigmatic Brickhill was never simple. He was beset with mental-health issues and his marriage to model Margot Slater was tempestuous. He struggled with alcohol and writer's block too, as his success - and all that accompanied it - threatened to overwhelm him.

In The Hero Maker, award-winning historical author and biographer Stephen Dando-Collins exposes the contradictions of one of Australia's most successful, but troubled, writers. Brickhill's extraordinary story - from the youth with a debilitating stutter to Sydney Sun journalist to Spitfire pilot and POW to feted author - explodes vividly to life on the centenary of his birth.

» Have you read this book? We'd like to know what you think about it - write a review about Hero Maker book by Stephen Dando-Collins and you'll earn 50c in Boomerang Bucks loyalty dollars (you must be a Boomerang Books Account Holder - it's free to sign up and there are great benefits!)

Stephen Dando-Collins is the author of the acclaimed Captain Bligh's Other Mutiny. Pasteur's Gambit was shortlisted for the science prize in the Victorian Premier's Literary Awards and won the Queensland Premier's Science Award. Crack Hardy, his most personal history, received wide acclaim. Mistaken Identity tells another episode of previously undiscovered Australian history. Sir Henry Parkes- The Australian Colossus is a biography of Australia's Father of Federation. He also writes about American and ancient Greek history, and his series about the legions of ancient Rome has found considerable success in the US, UK and Australia and been translated into numerous foreign languages. Stephen has also written several books for children and young adults including the Caesar the War Dog series, Tank Boys and Chance in a Million. Stephen and his wife, Louise, live and write in a former nunnery in Tasmania's Tamar Valley.