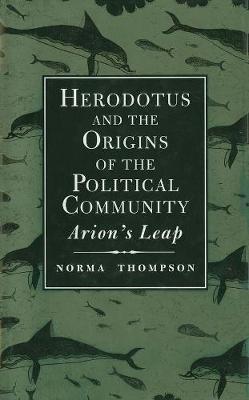 Herodotus and the Origins of the Political Community

Norma Thompson opens a new angle of political vision in this imaginative and engaging interpretation of Herodotus' History. She claims for the "father of history" a position in the canon of political thought, finding modern validity in his fundamental perceptions about the importance of stories to the coherence of political communities.

Thompson arrives at a unique explanation for Herodotus' side-by-side placement of factual and fanciful historical stories. She contends that he recognized the central importance of compelling stories, even imaginary ones like the tale of Arion, the poet and singer who leaped into the sea to escape Corinthian pirates and was carried to safety on the back of a dolphin. Such stories can become the "facts" of a people's past and thereby the core of the political community. Herodotus understood that stories define and bind together one polity as distinct from others. Further, a polity evolves in reference to its own defining story. Thompson relates Herodotus' work to historical and cultural debate among such scholars as Martin Bernal, Francois Hartog, and Edward Said, and she invites philosophers, philologists, anthropologists, historiographers, and political theorists into the discussion.

Buy Herodotus and the Origins of the Political Community by Norma Thompson from Australia's Online Independent Bookstore, Boomerang Books.

» Have you read this book? We'd like to know what you think about it - write a review about Herodotus and the Origins of the Political Community book by Norma Thompson and you'll earn 50c in Boomerang Bucks loyalty dollars (you must be a Boomerang Books Account Holder - it's free to sign up and there are great benefits!)

Norma Thompson is assistant professor of political science and director of undergraduate studies, the Program of Directed Studies, at Yale University.

A Preview for this title is currently not available.
More Books By Norma Thompson
View All