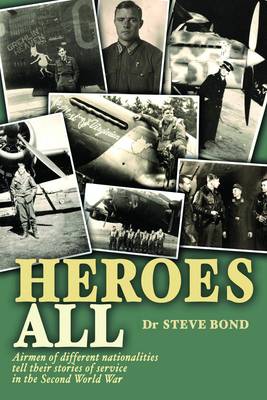 Description - Heroes All by Steve Bond

For years, Steve Bond has been interviewing and recording veterans from all sides of the conflict, including air and ground crew. His aim was to transmit their engaging stories faithfully to a wider public. He spoke to British and German, German and Russian, British and Italian, American and German, who all shared the same piece of sky at the same time, in a sense, re-uniting them, sometimes also literally. This is not a book about the rights and wrongs of war, nor the strategies of the military commanders. It is about the experiences and feelings of those in the front line charged with delivery of said strategy. It deals with the sharp end of key campaigns, but also the less 'glamorous' sides of service life - selection, training, aircraft ferrying, etc. This is all original material and the stories of the veterans selected (some of them household names) are not edited but put in context by Bond, with overviews and annotations. The result gives the reader an up close series of snapshots in time, which is always fascinating, often remarkably so, and will stand as a worthy and valuable testament to the airmen themselves. Veterans quoted are from the following groupings: Air Transport Auxiliary, British Army, Civilians, Fleet Air Arm, Italian air force, Luftwaffe, Royal Air Force, Royal Canadian Air Force and Navy, Soviet air force, US Army, US Army Air Force, US Navy et al.

» Have you read this book? We'd like to know what you think about it - write a review about Heroes All book by Steve Bond and you'll earn 50c in Boomerang Bucks loyalty dollars (you must be a Boomerang Books Account Holder - it's free to sign up and there are great benefits!)