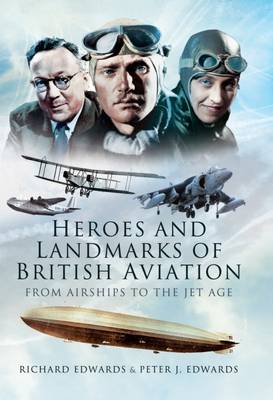 Heroes and Landmarks of British Aviation

from Airships to the Jet Age

Heroes and Landmarks of British Aviation tells the dramatic story of a world leading aviation industry, from the sweat and grease of the workshop, to the board rooms and government nationalisations that ultimately fashioned its destiny. The heroes are Britain's most innovative aviation pioneers and their aircraft, the men and women who persevered to be the first into the air, to fly the fastest, the highest and the furthest. This broad and highly accessible books ranges from the first man to fly across the English Channel from England to France to the development of the Spitfire and from the disastrous R101 airship to the development of the jet engine and ultimately the world's first supersonic airliner. Each chapter looks at a different aviation pioneer and the flying machines that they designed, their engineering landmarks, their triumphs in the air and on occasion their disasters too. The book explores the great air races that were won and lost, the government contracts and political short-sightedness that cut short the development of leading aircraft designs and many of the dramatic air raids and sea battles from the First World War to the Falklands and the Middle East. Many of the industry's most prominent names are profiled, including Ernest Willows, the Short brothers, Geoffrey de Havilland, Vincent Richmond, George White, Thomas Sopwith, Harry Hawker, RJ Mitchell, Herbert Smith, Charles Rolls, Henry Royce, Reginald Pierson, Alliott Verdon-Roe, Frederick Handley Page, Robert Watson-Watt, Robert Blackburn and Frank Whittle. Behind the personal stories are the histories of the aircraft companies that these pioneers created, from those that went bankrupt to those that lasted the test of time and have become indivisible from British aviation folklore, such names as Sopwith, Handley Page, Avro, Supermarine, Blackburn, Bristol, Fairey and Rolls-Royce. The book covers the mergers and acquisitions that led to the creation of two major aircraft manufacturers, Hawker Siddeley Group and the British Aircraft Corporation, and how barely two decades later, before the century was out, they were nationalised to form British Aerospace. SELLING POINTS: There are many 70th Anniversaries fromm WW2 over the approaching four years Explains the pivotal position of Britain's part in the advancement of aviation ILLUSTRATIONS: 70 mono photographs

» Have you read this book? We'd like to know what you think about it - write a review about Heroes and Landmarks of British Aviation book by Peter J. Edwards and you'll earn 50c in Boomerang Bucks loyalty dollars (you must be a Boomerang Books Account Holder - it's free to sign up and there are great benefits!)

Peter Edwards served in the RAF from 1945 and later became a school teacher. He maintained a life-long passion for military history and has had numerous magazine articles publish.

A Preview for this title is currently not available.
More Books By Peter J. Edwards
View All

Rise and Fall of the Japanese Imperial Naval Air Service
No Stock on Hand, Supplier Has No Due Date for Supply.
$67.50 $75.00