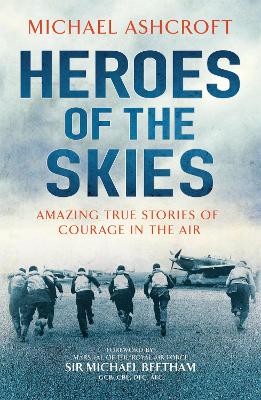 Heroes of the Skies

Description - Heroes of the Skies by Michael Ashcroft

In HEROES OF THE SKIES, Michael Ashcroft relays the stories our most courageous airmen. From those who flew when aeroplanes were in their flimsy infancy during the First World War, through the bomber crews and fighter pilots of the Second World War, to heroes of more recent conflicts in Northern Ireland, the Falklands and Afghanistan, every man in this book risked his life for his comrades and his country. In telling the stories of the individual bravery of more than eighty such men, HEROES OF THE SKIES also paints a picture of a century of aerial combat and allows us to celebrate the extraordinary feats of our flying heroes.

Book Reviews - Heroes of the Skies by Michael Ashcroft

» Have you read this book? We'd like to know what you think about it - write a review about Heroes of the Skies book by Michael Ashcroft and you'll earn 50c in Boomerang Bucks loyalty dollars (you must be a Boomerang Books Account Holder - it's free to sign up and there are great benefits!)

Lord Ashcroft, KCMG, is an international businessman, author and philanthropist. He has a life-long interest in bravery and gallantry medals. His collection of Victoria Crosses and George Crosses can be seen in the Lord Ashcroft Gallery in the Imperial War Museum in London. Heroes of the Skies is his eighth book.

A Preview for this title is currently not available.
More Books By Michael Ashcroft
View All