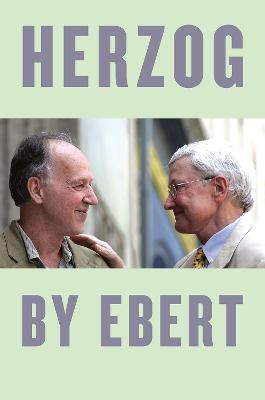 Roger Ebert was the most influential film critic in the United States, the first to win a Pulitzer Prize. For almost fifty years, he wrote with plainspoken eloquence about the films he loved for the Chicago Sun-Times, his vast cinematic knowledge matched by a sheer love of life that bolstered his appreciation of films. Ebert had particular admiration for the work of director Werner Herzog, whom he first encountered at the New York Film Festival in 1968, the start of a long and productive relationship between the filmmaker and the film critic.

Herzog by Ebert is a comprehensive collection of Ebert's writings about the legendary director, featuring all of his reviews of individual films, as well as longer essays he wrote for his Great Movies series. The book also brings together other essays, letters, and interviews, including a letter Ebert wrote Herzog upon learning of the dedication to him of "Encounters at the End of the World;" a multifaceted profile written at the 1982 Cannes Film Festival; and an interview with Herzog at Facet's Multimedia in 1979 that has previously been available only in a difficult-to-obtain pamphlet. Herzog himself contributes a foreword in which he discusses his relationship with Ebert.

Brimming with insights from both filmmaker and film critic, Herzog by Ebert will be essential for fans of either of their prolific bodies of work.

» Have you read this book? We'd like to know what you think about it - write a review about Herzog by Ebert book by Roger Ebert and you'll earn 50c in Boomerang Bucks loyalty dollars (you must be a Boomerang Books Account Holder - it's free to sign up and there are great benefits!)

Roger Ebert (1942-2013) was a Pulitzer Prize-winning film critic for the Chicago Sun-Times. In 1975, he teamed up with Gene Siskel of the Chicago Tribune to host the popular Sneak Previews movie review program on PBS, which he continued under various titles for more than thirty-five years. He is the author of numerous books, including Awake in the Dark: The Best of Roger Ebert; the Great Movies collections; and a memoir, Life Itself.