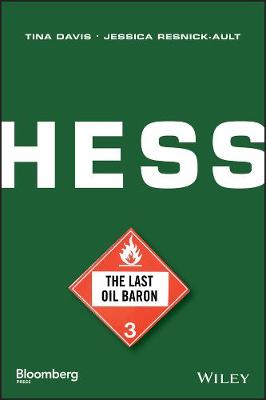 Hess: The Last Oil Baron profiles a titan of the oil industry, mapping the journey of the quintessential American dream. The story of Leon Hess follows an immigrant kosher butcher's son as he builds an oil dynasty that may never be matched. The multinational, multi-billion-dollar company began with a single second-hand delivery truck and the Rockefeller-caliber business acumen of one young man. Interviews with former employees, beneficiaries, and even his high school sweetheart provide an insider's perspective on the man behind the legacy, allowing today's aspiring entrepreneurs the opportunity to learn from one of the nation's most inspiring success stories.

Leon Hess built a global empire from the ground up. Along the way, he fought in a war, did business with Muammar Qaddafi, won a Super Bowl as the owner of the Jets, was involved in Watergate, and introduced the Hess toy truck that became a holiday tradition for millions of Americans. More than just a book of business strategy, Hess tells the story of a life fascinatingly lived, and the legacy he left behind.

Leon Hess' strategies and techniques can be emulated and imitated, but his entrepreneurial fire is something altogether more rare. Hess provides readers with a glimpse of the man whose unrivaled ambition changed an industry and a nation.

» Have you read this book? We'd like to know what you think about it - write a review about Hess book by Tina Davis and you'll earn 50c in Boomerang Bucks loyalty dollars (you must be a Boomerang Books Account Holder - it's free to sign up and there are great benefits!)

TINA DAVIS is an editor for Bloomberg News and has been writing about energy issues for almost two decades. She previously worked for The Economist, the Sunday Times of London, and The Energy Daily. JESSICA RESNICK-AULT is an editor for Thomson Reuters and has been writing about energy for more than a decade. She previously worked for Bloomberg News, Dow Jones Newswires, and The Providence Journal.

A Preview for this title is currently not available.
More Books By Tina Davis
View All