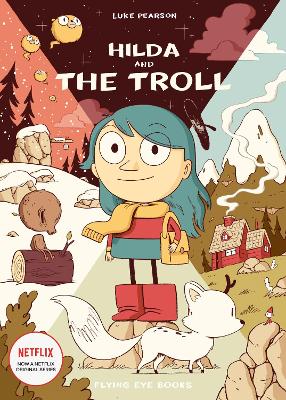 Hilda and the Troll

Description - Hilda and the Troll by Luke Pearson

Hilda can never sit still for long without setting off on another adventure. She can't resist exploring her enchanting worlda place where trolls walk, crows speak, and mountains move. The magic and folklore of the wild, windswept North come alive in this book about an adventurous little girl and her habit of befriending anything, no matter how curious it might seem. While on an expedition to illustrate the magical creatures of the mountains around her home, Hilda spots a mountain troll. As the blue-haired explorer sits and sketches, she slowly starts to nod off. By the time she wakes up, the troll has totally disappeared and, even worse, Hilda is lost in a snowstorm. On her way home, Hilda befriends a lonely wooden man, and narrowly avoids getting squashed by a lost giant. This brand new paperback edition of Hilda and the Troll offers a fresh chance to read the very first outing in Luke Pearson's ever-popular series of magical Hilda adventures. Luke Pearson, author of "Hilda and the Midnight Giant, Hilda and the Bird Parade, Hilda and the Black Hound" and "Everything We Miss," has fast become one of the leading talents of the UK comics scene.
"Hilda and the Midnight Giant" was selected as one of 2012's twenty-five best illustrated children's books by Publishers Weekly magazine. The book also won the Young People's Comic Award at the 2012 British Comic Awards."

Other Editions - Hilda and the Troll by Luke Pearson Book Reviews - Hilda and the Troll by Luke Pearson

» Have you read this book? We'd like to know what you think about it - write a review about Hilda and the Troll book by Luke Pearson and you'll earn 50c in Boomerang Bucks loyalty dollars (you must be a Boomerang Books Account Holder - it's free to sign up and there are great benefits!)

Luke Pearson, author of the phenomenally popular Hilda series and Everything We Miss, has fast become one of the leading talents of the UK comics scene, garnering rave reviews from The Times of London, The Observer and the prestigious Times Literary Supplement. Hilda and the Midnight Giant was selected by Publishers Weekly as one of 2012's top 25 Children's Picture Books and won the Young People's Comic Award at The British Comic Awards. Luke Pearson will be the featured cartoonist on "Slate" in April of 2013. He is also a frequent contributor to a number of comic anthologies in the UK as well as self-publishing a number of small-run homemade comics.

The Surprising Power of a Good Dumpling
Wai Chim
$15.99 $19.99
More Books By Luke Pearson
View All