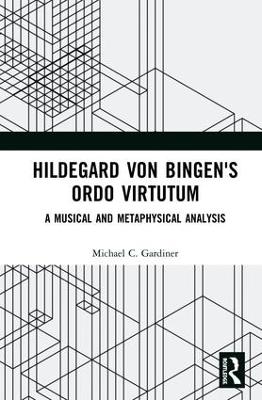 A Musical and Metaphysical Analysis

The Ordo Virtutum, Hildegard von Bingen's twelfth-century music-drama, is one of the first known examples of a large-scale composition by a named composer in the Western canon. Not only does the Ordo's expansive duration set it apart from its precursors, but also its complex imagery and non-biblical narrative have raised various questions concerning its context and genre. As a poetic meditation on the fall of a soul, the Ordo deploys an array of personified virtues and musical forces over the course of its eighty-seven chants. In this ambitious analysis of the work, Michael C. Gardiner examines how classical Neoplatonic hierarchies are established in the music-drama and considers how they are mediated and subverted through a series of concentric absorptions (absorptions related to medieval Platonism and its various theological developments) which lie at the core of the work's musical design and text. This is achieved primarily through Gardiner's musical network model, which implicates mode into a networked system of nodes, and draws upon parallels with the medieval interpretation of Platonic ontology and Hildegard's correlative realization through sound, song, and voice.

» Have you read this book? We'd like to know what you think about it - write a review about Hildegard von Bingen's Ordo Virtutum book by Michael Gardiner and you'll earn 50c in Boomerang Bucks loyalty dollars (you must be a Boomerang Books Account Holder - it's free to sign up and there are great benefits!)


A Preview for this title is currently not available.
More Books By Michael Gardiner
View All

The British Stake In Japanese Modernity: Readings in Liberal Tradition and Native Modernism
$249.48 $252.00