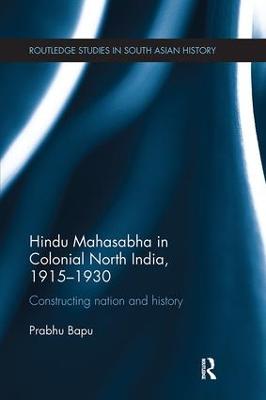 Hindu nationalism has emerged as a political ideology represented by the Hindu Mahasabha. This book explores the campaign for Hindu unity and organisation in the context of the Hindu-Muslim conflict in colonial north India in the early twentieth century. It argues that India's partition in 1947 was a result of the campaign and politics of the Hindu rightwing rather than the Islamist politics of the Muslim League alone.

The book explains that the Mahasabha articulated Hindu nationalist ideology as a means of constructing a distinct Hindu political identity and unity among the Hindus in conflict with the Muslims in the country. It looks at the Mahasabha's ambivalence with the Indian National Congress due to an extreme ideological opposition, and goes on to argue that the Mahasabha had its ideological focus on an anti-Muslim antagonism rather than the anti-British struggle for India's independence, adding to the difficulties in the negotiations on Hindu-Muslim representation in the country. The book suggests that the Mahasabha had a limited class and regional base and was unable to generate much in the way of a mass movement of its own, but developed a quasi-military wing, besides its involvement in a number of popular campaigns.

Bridging the gap in Indian historiography by focusing on the development and evolution of Hindu nationalism in its formative period, this book is a useful study for students and scholars of Asian Studies and Political History. 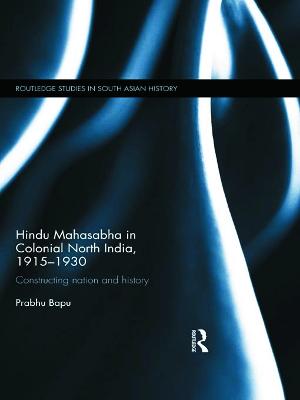 » Have you read this book? We'd like to know what you think about it - write a review about Hindu Mahasabha in Colonial North India, 1915-1930 book by Prabhu Bapu and you'll earn 50c in Boomerang Bucks loyalty dollars (you must be a Boomerang Books Account Holder - it's free to sign up and there are great benefits!)

Prabhu Bapu was educated at the London School of Economics, UK, and has a doctorate in History from the School of Oriental and African Studies, University of London, UK.

A Preview for this title is currently not available.
More Books By Prabhu Bapu
View All