Providing new insights into the contemporary creationist-evolution debates, this book looks at the Hindu cultural-religious traditions of India, the Hindu Dharma traditions. By focusing on the interaction of religion and science in a Hindu context, it offers a global context for understanding contemporary creationist-evolution conflicts and tensions utilizing a critical analysis of Hindu perspectives on these issues. The cultural and political as well as theological nature of these conflicts is illustrated by drawing attention to parallels with contemporary Islamic and Buddhist responses to modern science and Darwinism.

The book explores various ancient and classical Hindu models to explain the origin of the universe encompassing creationist as well as evolutionary-but non-Darwinian-interpretations of how we came to be. Complex schemes of cosmic evolution were developed, alongside creationist proofs for the existence of God utilizing distinctly Hindu versions of the design argument. After examining diverse elements of the Hindu Dharmic traditions that laid the groundwork for an ambivalent response to Darwinism when it first became known in India, the book highlights the significance of the colonial context. Analysing critically the question of compatibility between traditional Dharmic theories of knowledge and the epistemological assumptions underlying contemporary scientific methodology, the book raises broad questions regarding the frequently alleged harmony of Hinduism, the eternal Dharma, with modern science, and with Darwinian evolution in particular.

Other Editions - Hindu Perspectives on Evolution by C. Mackenzie Brown 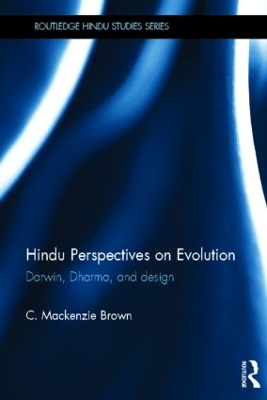 » Have you read this book? We'd like to know what you think about it - write a review about Hindu Perspectives on Evolution book by C. Mackenzie Brown and you'll earn 50c in Boomerang Bucks loyalty dollars (you must be a Boomerang Books Account Holder - it's free to sign up and there are great benefits!)

C. Mackenzie Brown is Professor of Religion at Trinity University, USA. His research interests include the relationship of Hinduism and modern science, with particular focus on creationism and evolution.

A Preview for this title is currently not available.
More Books By C. Mackenzie Brown
View All