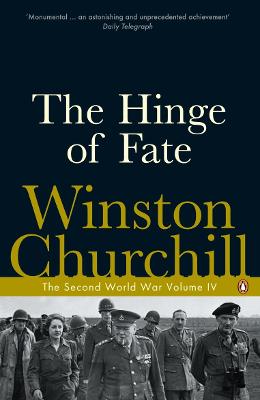 The Hinge of Fate

Description - The Hinge of Fate by Winston Churchill

In his introduction, John Keegan discusses Churchill's historical methods and the extraordinary achievement of The Second World War. This volume also includes appendices, an index, maps and diagrams.

Winston Churchill's six-volume history of the cataclysm that swept the world remains the definitive history of the Second World War. Lucid, dramatic, remarkable both for its breadth and sweep and for its sense of personal involvement, it is universally acknowledged as a magnificent reconstruction and is an enduring, compelling work that led to his being awarded the Nobel Prize for literature. The Hinge of Fate describes how the tide of the war gradually turned for Britain and its allies from constant defeat to almost unbroken successes - Japan's successful assault on the Pacific, Britain's attempts to aid a beleaguered Russia and the defeat of Rommel at the Battle of Alamein.

Book Reviews - The Hinge of Fate by Winston Churchill

» Have you read this book? We'd like to know what you think about it - write a review about Hinge of Fate book by Winston Churchill and you'll earn 50c in Boomerang Bucks loyalty dollars (you must be a Boomerang Books Account Holder - it's free to sign up and there are great benefits!)