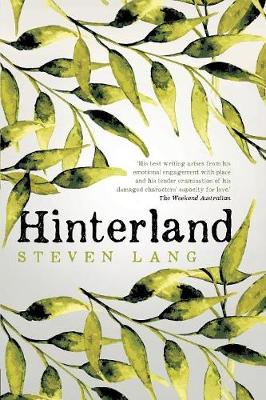 'We have this idea we can live anywhere, that we make a choice, but it?s not true. There are places that are for you and places that aren?t. You can tell which is which if you?re prepared to listen.?Tensions have been slowly building in the old farming district of Winderran. Its rich landscape has attracted a new wave of urban tree-changers and wealthy developers. But traditional loyalties and values are pushed to the brink with the announcement of a controversial dam project. Locals Eugenie and Guy are forced to choose sides, while newcomer Nick discovers there are more sinister forces at work. The personal and the political soon collide in ways that will change their fates and determine the future of the town.In Hinterland, Steven Lang has created a gripping novel that captures contemporary Australia in all of its natural beauty and conflicting ambitions.

» Have you read this book? We'd like to know what you think about it - write a review about Hinterland book by Steven Lang and you'll earn 50c in Boomerang Bucks loyalty dollars (you must be a Boomerang Books Account Holder - it's free to sign up and there are great benefits!)

Steven Lang is the author of two novels, An Accidental Terrorist, which won Premiers' Literary Awards in two states, and 88 Lines about 44 Women, which was shortlisted for both the NSW and Queensland Premier's Literary Awards for Fiction. He co-directs Outspoken, an extended writers' festival which takes the form of occasional conversations with major Australian and international writers. Steven lives in Maleny in south-east Queensland. http-//stevenlang.com.au/