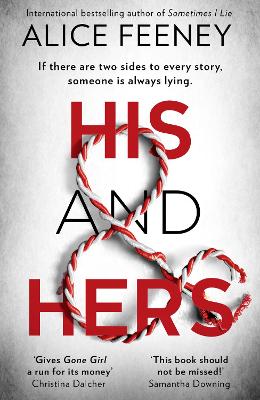 Description - His and Hers by Alice Feeney

SOON TO BE A MAJOR TV SERIES, WITH JESSICA CHASTAIN AS EXECUTIVE PRODUCER

'Stunning, addictive ... this book should not be missed!' Samantha Downing, Sunday Times bestselling author of My Lovely Wife

'This is great ... Keeps you guessing all the way through' Jane Fallon

'Alice writes the twisty sort of novel that leaves you breathless and unsure about everything and everyone... Warning - could cause sleepless nights!' Adele Parks, Platinum

'We gulped down this intense thriller in one heart-in-our-mouth afternoon - it's that good!' Sun on Sunday Fabulous

'A pacy thriller full of lies' My Weekly

If there are two sides to every story, someone is always lying...

Anna: I only need one word to describe my husband: Liar.

When a woman is murdered in Blackdown village, newsreader Anna Andrews is reluctant to cover the case. Anna's ex-husband, DCI Jack Harper, is suspicious of her involvement, until he becomes a suspect in his own murder investigation.

Someone is lying, and some secrets are worth killing to keep.

'An absolute must for thriller fans!'

'I loved every page of this book'

'Best psychological thriller I have read'

'This book completely sucked me in. I couldn't put it down'

'It's dark, disturbing, beautifully written and finished it in almost one sitting'

Buy His and Hers by Alice Feeney from Australia's Online Independent Bookstore, Boomerang Books.

Other Editions - His and Hers by Alice Feeney Book Reviews - His and Hers by Alice Feeney

» Have you read this book? We'd like to know what you think about it - write a review about His and Hers book by Alice Feeney and you'll earn 50c in Boomerang Bucks loyalty dollars (you must be a Boomerang Books Account Holder - it's free to sign up and there are great benefits!)

5 stars His & Hers is the third novel by British journalist and author, Alice Feeney. The audio version is narrated by Stephanie Racine and Richard Armitage. When DCI Jack Harper is called out to a murder in the woods near Blackdown, he’s shocked to realise the victim is a woman with whom he was intimate the previous evening. And he soon discovers several other items that make it clear that someone might be setting him up as the suspect in his own investigation.

Already stunned to have been casually demoted from her BBC TV newsreader position, Anna Andrews is even less impressed to be sent to Blackdown to cover possible murder case. Blackdown is the place she grew up, and she’d be happy never to return: too many unhappy memories, one of which involves the victim.

Jack is dismayed to see his ex-wife at the scene, not least because she’s with a BBC press photographer, but also because it stirs too many sad memories. He already has a challenging case to run, with a young, too-eager-to-please colleague, DS Pria Patel, who’s getting on his nerves, and pressure from higher-up to get a result.

With little more than a puzzling message on the victim’s nails, a strange item in the mouth and a boot-print, not much progress is made before, mere hours later, another victim is found. Jack isn’t at all sure that his small team is up to dealing with a serial killer. And it starts to look like Anna is personally involved…

The narrative is carried by three voices: mostly Jack and Anna, with occasional (in the audio, voice distorted) commentary by the murderer. If Jack’s part seems genuine and truthful, Anna’s feels less reliable, while the murderer’s parts are often quite cryptic. Overall, it is sufficiently ambiguous to throw suspicion on several characters.

Feeney is skilled at sowing the seeds of possibility. The slow disclosure of important information, connections and (sometimes) explosive secrets make this a pages turner. Red herrings, twists and distractions mislead and keep reader guessing and cycling through potential murder suspects right up to the thrilling climax. And beyond. Gripping British crime fiction. This unbiased review is from an audio copy provided by NetGalley and Macmillan audio.

A Preview for this title is currently not available.
More Books By Alice Feeney
View All

Sometimes I Lie: A psychological thriller with a killer twist you'll never forget
$21.29 $23.66