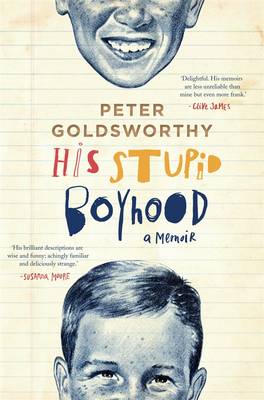 His Stupid Boyhood: A Memoir

Description - His Stupid Boyhood: A Memoir by Peter Goldsworthy

Few Australian writers have delved as deeply as Peter Goldsworthy into the mysterious state of being that is childhood.

In this memoir he applies his fascination with that state to his own boyhood, from his bizarre first memories to the embarrassments of adolescence. For all his working life Goldsworthy has been both doctor and writer - Australia's Chekhov - and here he reveals a mind charmed equally by science and literature, by the rational and the imagined.

The country towns he grew up in gave free rein to the young Peter's intense curiosity, and in the fifties and sixties he ran amok in hilarious fashion. A boy with a mind wide open to the universe but closed to self-knowledge, he came of age with a naive self-confidence that was ripe for the bursting.

Comically self-deprecating, unrestrained in its honesty, His Stupid Boyhood is a passport to the lost country of youth, and a beautiful homage to childhood in general.

'Australia's most wide-ranging writer shows us where it all comes from- out of that single, concentrated, burningly self-conscious point of being an unusually alert infant.' Clive James

'Goldsworthy writes with a graceful irony of the terror, boredom, longing, shame and leation of boyhood. We can only hope that this is the first volume of his story.' Susanna Moore

Book Reviews - His Stupid Boyhood: A Memoir by Peter Goldsworthy

» Have you read this book? We'd like to know what you think about it - write a review about His Stupid Boyhood: A Memoir book by Peter Goldsworthy and you'll earn 50c in Boomerang Bucks loyalty dollars (you must be a Boomerang Books Account Holder - it's free to sign up and there are great benefits!)

Peter Goldsworthy grew up in various Australian country towns, finishing his schooling in Darwin. After graduating in medicine from the University of Adelaide in 1974 he worked for several years in alcohol and drug rehabilitation, but since then has divided his working time between general practice and writing. He has won major literary awards across a range of genres- poetry, short story, novels, theatre, and opera libretti. Goldsworthy's novels have sold over 400 000 copies in Australia alone, and have been translated into European and Asian languages. His novels have three times been shortlisted for the NSW Christina Stead Fiction Prize, and twice for the Miles Franklin Award. Three Dog Night won the 2004 FAW Christina Stead Award, and was longlisted for the Dublin IMPAC prize. In 2003, his first novel, Maestro, was voted by members of the Australian Society of Authors as one of the Top 40 Australian books of all time. Five of his novels have been adapted for stage and screen. Everything I Knew, published in 2008, was shortlisted for the Prime Minister's Fiction Prize. A collection of short stories, Gravel, was published in 2010.