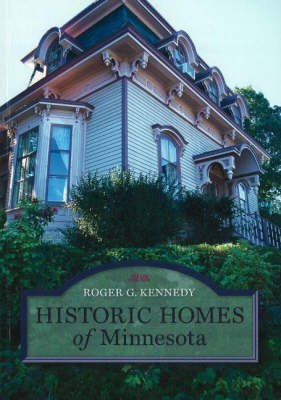 Historic Homes of Minnesota is the engaging story of the evolution of architectural styles in Minnesota from 1830 to 1914 -- from the influence of the early French traders along the Mississippi and St Croix to the emergence of the school of Frank Lloyd Wright. Through photographs and colourfully informative text, internationally known historian Roger Kennedy helps readers understand the unique styles of Minnesota's first homes, including the Mower House in Arcola, the first large house on the St. Croix; Alexander Ramsey's 'Mansion House' in St Paul, influenced by Pennsylvania Dutch virtues; the whimsical Charles C. Clement house in Fergus Falls, clearly Norse in spirit; and the Purcell House in Minneapolis, a fine example of the Prairie School design. On a broad plane these architectural eras reflected social customs, politics, commerce, religion, and literature. On a personal level they often revealed the national origin and character of the families that made the house a home. In short, this is in large measure a history of the people.
Kennedy has considered their heritage and traditions as carefully as he has examined the architecture they created, and he offers a fresh, holistic approach to the study of our state's great houses.

» Have you read this book? We'd like to know what you think about it - write a review about Historic Homes of Minnesota book by Roger G. Kennedy and you'll earn 50c in Boomerang Bucks loyalty dollars (you must be a Boomerang Books Account Holder - it's free to sign up and there are great benefits!)

Roger G Kennedy, former director of both the National Park Service and the Smithsonian's National Museum of American History, has written more than ten books and has appeared in his own series on the Discovery Channel.

A Preview for this title is currently not available.
More Books By Roger G. Kennedy
View All