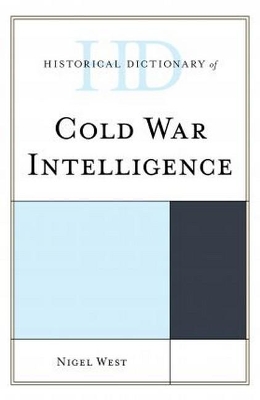 The Cold War was a sophisticated conflict fought by the west, principally the United States, Great Britain, Canada, Australia and New Zealand, with support from NATO, CENTO and SEATO, to confront the Kremlin and its Warsaw Pact satellites. The battlegrounds extended from Latvia, Lithuania, Estonia, Byelorussia and Albania to Czechoslovakia, Poland and Hungary, and resulted in conventional, proxy wars fought in Vietnam, Egypt and Korea. Only now, thirty years after the fall of the Berlin Wall, can these issues be examined through the prism of the secret files generated by the intelligence agencies on both sides which have been declassified.

This Historical Dictionary of Cold War Intelligence contains a chronology, an introduction, and an extensive bibliography. The dictionary section has hundreds of cross-referenced dictionary entries on crucial operations spies, defectors, moles, double and triple agents, and the tradecraft they apply. This book is an excellent resource for students, researchers, and anyone wanting to know more about intelligence during the Cold War.

» Have you read this book? We'd like to know what you think about it - write a review about Historical Dictionary of Cold War Intelligence book by Nigel West and you'll earn 50c in Boomerang Bucks loyalty dollars (you must be a Boomerang Books Account Holder - it's free to sign up and there are great benefits!)