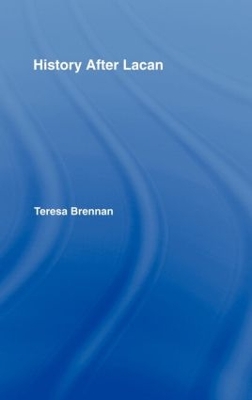 Lacan was not an ahistorical post-structuralist. Starting from this controversial premise, Teresa Brennan tells the story of a social psychosis. She begins by recovering Lacan's neglected theory of history which argued that we are in the grip of a psychotic's era which began in the 17th century and climaxes in the present. By extending and elaborating Lacan's theory, Brennan develops a general theory of modernity. Contrary to postmodern assumptions, she argues, we need general historical explanation. An understanding of historical dynamics is essential if we are to make the connections between the outstanding facts of modernity - ethnocentrism, the relationship between the sexes and ecological catastrophe.

Other Editions - History After Lacan by Teresa Brennan » Have you read this book? We'd like to know what you think about it - write a review about History After Lacan book by Teresa Brennan and you'll earn 50c in Boomerang Bucks loyalty dollars (you must be a Boomerang Books Account Holder - it's free to sign up and there are great benefits!)


A Preview for this title is currently not available.
More Books By Teresa Brennan
View All