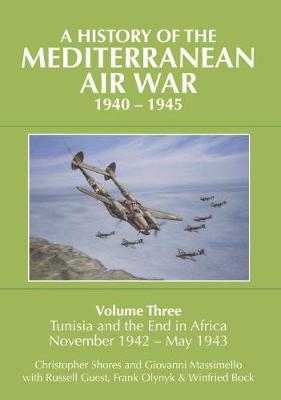 Description - A History of the Mediterranean Air War, 1940-1945 by Christopher Shores

Tunisia and the End in Africa November 1942 - 1943 The third volume in this series returns to November 1942 to explain the background to the first major Anglo-American venture Operation Torch, the invasion of French North Africa. It deals with the fratricidal combats which followed the initial landings in Morocco and Algeria for several days. It then considers the efforts made unsuccessfully in the event to reach northern Tunisia before the Germans and Italians could get there to forestall the possibility of an attack from the west on the rear of the Afrika Korps forces, then beginning their retreat from El Alamein. The six months of hard fighting which followed as the Allies built up the strength of their joint air forces and gradually wrested control of the skies from the Axis, are covered in detail. Then from 1 April 1943 the continuing story of the Western Desert Air Force is told from the point at which Volume 2 ended, as it advanced from the east to join hands with the units in the west. Now also described are the arrivals over the front of American pilots and crew, the P-38 Lightning, the Spitfire IX and the B-17 Flying Fortress and of the much-feared Focke-Wulf FW 190. The aerial activities over Tunisia became one of the focal turning points of World War II, yet this is frequently overlooked by historians. As before, the air-sea activities, the reconnaissance flights and the growing day and night bomber offensives form a major part of this volume. The mastery of the whole African coastline of the southern Mediterranean by the Allies prepared the way for the invasions of the European territories on the other side of this critical sea during 1943, which will be dealt with in Volume 4. REVIEWS: (for Volume 1 and Volume 2) 'The start of a long-awaited, comprehensive and definitive set of books.' Flypast 'It is a valuable addition for the libraries of those with a serious interest in wartime military aviation.' Air-Britain Aeromilitaria 'A monumental book. This is only the first volume of the Mediterranean Air War and when the series is completed it will constitute the most complete record of this theatre of war to have been compiled. It is unlikely to be surpassed.' Britain at War Illustrated throughout

Other Editions - A History of the Mediterranean Air War, 1940-1945 by Christopher Shores 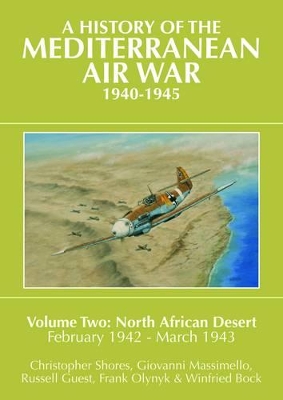 Book Reviews - A History of the Mediterranean Air War, 1940-1945 by Christopher Shores

» Have you read this book? We'd like to know what you think about it - write a review about History of the Mediterranean Air War, 1940-1945 book by Christopher Shores and you'll earn 50c in Boomerang Bucks loyalty dollars (you must be a Boomerang Books Account Holder - it's free to sign up and there are great benefits!)


A Preview for this title is currently not available.
More Books By Christopher Shores
View All