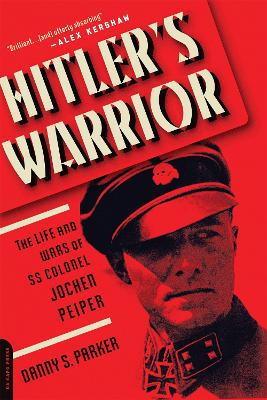 The Life and Wars of SS Colonel Jochen Peiper

SS Colonel Jochen Peiper was one of the most controversial figures of World War II. Himmler's personal adjutant and Hitler's favourite tank commander, Peiper spearheaded the Ardennes Offensive and became the central subject in the famous Malmedy massacre trial. In Hitler's Warrior , Danny S. Parker crafts both a definitive biography of Hitler's most enigmatic warrior and a unique study of the morally inverted world of the Third Reich.

» Have you read this book? We'd like to know what you think about it - write a review about Hitler's Warrior book by Danny Parker and you'll earn 50c in Boomerang Bucks loyalty dollars (you must be a Boomerang Books Account Holder - it's free to sign up and there are great benefits!)

Danny S. Parker is widely regarded as an expert on World War II in Europe. He has written extensively about the Ardennes military campaign and the Malmedy massacre, including the highly acclaimed Fatal Crossroads, Battle of the Bulge, and To Win the Winter Sky. He lives in Cocoa Beach, Florida.

A Preview for this title is currently not available.
More Books By Danny Parker
View All