The complete and authoritative account of the sinking of the HMAS Sydney, and the finding of her wreck in 2008. On 19 November 1941, the pride of the Australian Navy, the light cruiser Sydney, fought a close-quarters battle with the German armed raider HSK Kormoran off Carnarvon on the West Australian coast. Both ships sank - and not one of the 645 men on board the Sydney survived. Was Sydney's captain guilty of negligence by allowing his ship to manoeuvre within range of Kormoran's guns? Did the Germans feign surrender before firing a torpedo at the Sydney as she prepared to despatch a boarding party? This updated edition covers the discovery of the wreck - with the light this sheds on the events of that day in 1941, and the closure it has brought to so many grieving families. 'Tom Frame has produced the most comprehensive and compelling account of the loss of HMAS Sydney to date. His judgements are fair and his conclusions reasoned. If you only read one book on this tragic event in Australian naval history, and want all the facts and theories presented in a balanced way, Tom Frame's book is for you.' - Vice Admiral Russ Shalders AO CSC RANR Chief of Navy, 2005-08. 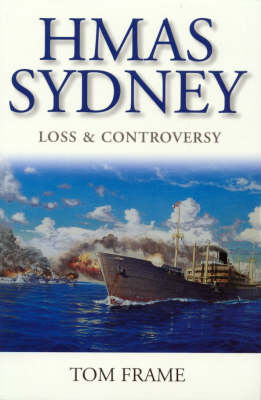 » Have you read this book? We'd like to know what you think about it - write a review about HMAS Sydney book by Tom Frame and you'll earn 50c in Boomerang Bucks loyalty dollars (you must be a Boomerang Books Account Holder - it's free to sign up and there are great benefits!)

Professor Tom Frame joined the RAN College, HMAS Creswell, as a 16-year old junior entry cadet midshipman in 1979. He served at sea and ashore, including a posting as Research Officer to the Chief of Naval Staff, and completed a PhD at UNSW Canberra in 1992 on the 1964 HMAS Voyager disaster. He has been a Visiting Fellow in the School of Astronomy and Astrophysics at the Australian National University (2000-2003); Patron of the Armed Forces Federation of Australia (2002-06), a member of the Council of the Australian War Memorial (2004-07) and judged the inaugural Prime Minister's Prize for Australian History (2007). A graduate of the Universities of NSW, Melbourne and Kent, he was appointed Director of the Australian Centre for the Study of Armed Conflict and Society (ACSACS) in July 2014. Tom Frame is the author or editor of 34 books including Mutiny!, Where Fate Calls: The HMAS Voyager Tragedy and The Life and Death of Harold Holt.

A Preview for this title is currently not available.
More Books By Tom Frame
View All