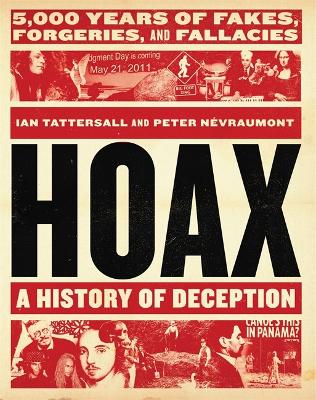 Hoax: A History of Deception

5,000 Years of Fakes, Forgeries, and Fallacies

Description - Hoax: A History of Deception by Ian Tattersall

An enthralling exploration of the most audacious and underhanded deceptions in the history of mankind, from sacred relics to financial schemes to fake art, music, and identities.World history is littered with tall tales and those who have fallen for them. Ian Tattersall, a curator emeritus at the American Museum of Natural History, and Peter Nevraumont, an award-winning book producer, have teamed up to create this anti-history of the world, in which Michelangelo fakes a cupid; the holy foreskin is venerated; arctic explorers search for an entrance into a hollow Earth; a woman is elected Pope; and people can survive on only air and sunshine. Told chronologically, HOAX begins with the first documented announcement of the end of the world from 365 AD and winds its way through controversial tales such as the Loch Ness Monster and the Shroud of Turin, past proven fakes such as the Thomas Jefferson's ancient wine and the Davenport Tablets built by a lost race, and explores bald-faced lies in the art world, journalism, and archeology.

Book Reviews - Hoax: A History of Deception by Ian Tattersall

» Have you read this book? We'd like to know what you think about it - write a review about Hoax: A History of Deception book by Ian Tattersall and you'll earn 50c in Boomerang Bucks loyalty dollars (you must be a Boomerang Books Account Holder - it's free to sign up and there are great benefits!)

Ian Tattersall, PhD, is Curator Emeritus in the Division of Anthropology of the American Museum of Natural History in New York City, where he co-curates the Spitzer Hall of Human Origins. He is the acknowledged leader of the human fossil record, and has won several awards, including the Institute of Human Origins Lifetime Achievement Award. Tattersall has appeared on Charlie Rose and NPR's Science Friday, and has written for Scientific American and Archaeology. He's been widely cited by the media, including The New York Times, BBC, MSNBC, and National Geographic. Tattersall is the author of Masters of the Planet, which the Atlantic calls "Quietly magnificent," among other titles. He lives in New York City. Peter N. Nevraumont has produced a number of award-winning natural history book and worked with some of the world's leading scientists, including Meave Leakey, Niles Eldredge, Stephen J. Gould, and Donald Johanson. He lives in New York City.

A Preview for this title is currently not available.
More Books By Ian Tattersall
View All