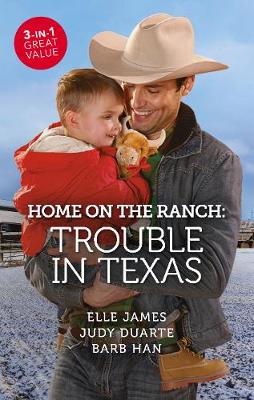 Sylvia Michaels had raised her son for four short months before he was cruelly snatched from her arms. Desperate and alone, her investigation led to Texas and the ranch of multi-millionaire, Tate Vincent. But what was supposed to be a joyous reunion was shattered by a hail of gunfire - and an empty cradle. Now both parents were on the hunt for the kidnappers and the child they each claimed as theirs. Tate couldn't deny that Sylvia fought with a mother's passion, and Sylvia couldn't help but notice that the protective man made the perfect father. But would their dreams of a family be shattered before it even began?

Braden Rayburn takes his responsibilities seriously. So how's he supposed to run his newly inherited ranch while being an interim father to his orphaned half-siblings, who don't speak a word of English? Lucky for him, he just met the beautiful answer to his prayers.

The high-energy twins had Elena Ramirez at 'hola.' But being a nanny - even a temporary one - at Braden's Texas ranch wasn't on the bilingual Brighton Valley native's career path, even if her attraction to the kids' gorgeous guardian is mutual. Elena's big-city dreams don't include falling for a footloose cowboy. Or is the Rayburn rancher already the perfect family man?

For as long as the O'Briens have run their ranch, their rivals have been the McCabes. So when Ryder O'Brien returns home, only one thing can screw things up: getting involved with Faith McCabe. There's no greater temptation and Ryder is about to pay the price for their forbidden fling.

For just as their passion ignites, Faith ups and leaves. Only to return five months later, seeking Ryder's help finding her missing brother - and pregnant with Ryder's baby. Ryder O'Brien may have held grudges longer than he ought to, but he always does right by his kin. Especially when the woman about to change his life is in danger.

» Have you read this book? We'd like to know what you think about it - write a review about Home On The Ranch: Trouble In Texas/Bundle of Trouble/The Cowboy's Double Trouble/Texas-Sized Trouble book by Judy Duarte and you'll earn 50c in Boomerang Bucks loyalty dollars (you must be a Boomerang Books Account Holder - it's free to sign up and there are great benefits!)


A Preview for this title is currently not available.
More Books By Judy Duarte
View All