The crime of homicide has long animated academic debate, community concern and political attention. The discussion has often centered on the perceived (in)adequacy of legal responses to homicide, questions of culpability, and divergent representations of victims and offenders. Within this, notions of gender, responsibility and justice are pivotal. This edited collection builds on existing scholarship by examining these concerns not only in the context of the 'private' world of domestic murder but also in the more 'public' world of the state, the corporation, war, and genocide. In so doing this book draws from key frameworks of criminological thought, legal analysis and empirical evidence to critically examine the relationship between homicide, gender and responsibility.

Bringing together leading international criminology and legal scholars, this collection provides a unique contribution to the academic and policy engagement with what is, more often than not, an ordinary and mundane crime. Analysing the crime in a variety of different social contexts alongside an in-depth and critical analysis of the interconnections between the ordinary act of lethal violence, gender and notions of responsibility, this book will be of interest to students, scholars and policymakers working in criminology and socio-legal studies.

Other Editions - Homicide, Gender and Responsibility by Kate Fitz-Gibbon 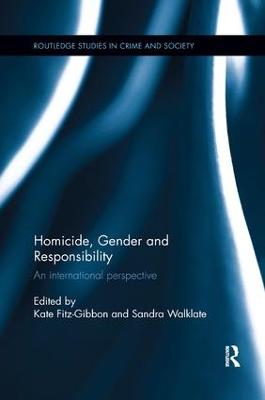 » Have you read this book? We'd like to know what you think about it - write a review about Homicide, Gender and Responsibility book by Kate Fitz-Gibbon and you'll earn 50c in Boomerang Bucks loyalty dollars (you must be a Boomerang Books Account Holder - it's free to sign up and there are great benefits!)

Kate Fitz-Gibbon is a Lecturer in Criminology in the School of Humanities and Social Sciences at Deakin University (Victoria, Australia). Her research examines legal responses to lethal violence, the law of homicide and the impact of criminal law reform across Australian and international jurisdictions. This research has been undertaken with a focus on gender, responsibility and justice. Dr Fitz-Gibbon has advised on homicide law reform reviews in several Australian jurisdictions. Recent publications include: Homicide Law Reform, Gender and the Provocation Defence (2014, Palgrave Macmillan) and Homicide Law Reform in Victoria: Retrospect and Prospects (edited with Arie Freiberg, 2015, The Federation Press). Sandra Walklate is Eleanor Rathbone Chair of Sociology at the University of Liverpool (United Kingdom) and adjunct professor at QUT in Brisbane. Internationally recognised for her work in victimology and research on criminal victimisation, her recent publications include: Victims: Trauma, Testimony, Justice (2015, Routledge with Ross McGarry), The Contradictions of Terrorism (2014, Routledge with Gabe Mythen), Criminology and War: Transgressing the Borders (edited collection, Routledge, 2015, with Ross McGarry). She is currently Editor in Chief of the British Journal of Criminology.