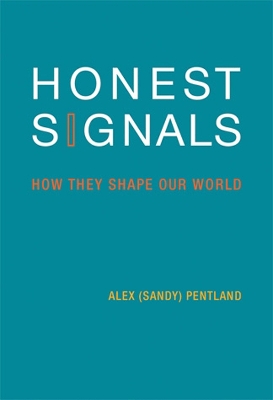 How They Shape Our World

How understanding the signaling within social networks can change the way we make decisions, work with others, and manage organizations.How can you know when someone is bluffing? Paying attention? Genuinely interested? The answer, writes Alex Pentland in Honest Signals, is that subtle patterns in how we interact with other people reveal our attitudes toward them. These unconscious social signals are not just a back channel or a complement to our conscious language; they form a separate communication network. Biologically based "honest signaling," evolved from ancient primate signaling mechanisms, offers an unmatched window into our intentions, goals, and values. If we understand this ancient channel of communication, Pentland claims, we can accurately predict the outcomes of situations ranging from job interviews to first dates.
Pentland, an MIT professor, has used a specially designed digital sensor worn like an ID badge-a "sociometer"-to monitor and analyze the back-and-forth patterns of signaling among groups of people. He and his researchers found that this second channel of communication, revolving not around words but around social relations, profoundly influences major decisions in our lives-even though we are largely unaware of it. Pentland presents the scientific background necessary for understanding this form of communication, applies it to examples of group behavior in real organizations, and shows how by "reading" our social networks we can become more successful at pitching an idea, getting a job, or closing a deal. Using this "network intelligence" theory of social signaling, Pentland describes how we can harness the intelligence of our social network to become better managers, workers, and communicators.

» Have you read this book? We'd like to know what you think about it - write a review about Honest Signals book by Alex Pentland and you'll earn 50c in Boomerang Bucks loyalty dollars (you must be a Boomerang Books Account Holder - it's free to sign up and there are great benefits!)

Karen Finley is a New York--based artist whose raw and personal performances, literature,installations, and visual art have long provoked controversy and debate. Herperformances include I'm an Ass Man, focusing on sexual abuse and violence (1985);The Constant State of Desire (1989); A Suggestion of Madness, honoring the10th anniversary of her father's death (1988); A Certain Level of Denial, a responseto the AIDS epidemic (1992); and The American Chestnut, a parallel between theillnesses of nature and the illnesses of society (1993), for which she received a Guggenheimfellowship. Finley was one of four artists whose NEA grant applications were vetoedin 1990 due to content considered "indecent." The four sued for reinstatement ofthe grants and won the case in 1993 in the ninth circuit court in Los Angeles. Thisruling was appealed and the case went to the Supreme Court and lost, in a decision thatallowed the government to place restrictions on funding based on "decency standards."Finley wrote and performed The Return of the Chocolate-Smeared Woman, arebuttal to Jesse Helms, in 1998 during the Supreme Court proceedings. She has madenumerous dance records and has written and directed plays, among them The Theoryof Total Blame (1988) and The Lamb of God Hotel (1992). She is the author ofShock Treatment (City Lights, 1990), Enough Is Enough (Poseidon, 1993), PoohUnplugged (Smart Art Press, 1999), A Different Kind of Intimacy: The CollectedWritings of Karen Finley (Thunder's Mouth Press, 2000), and has editedand contributed to Aroused: A Collection of Erotic Writings (Thunder's MouthPress, 2001).

A Preview for this title is currently not available.
More Books By Alex Pentland
View All